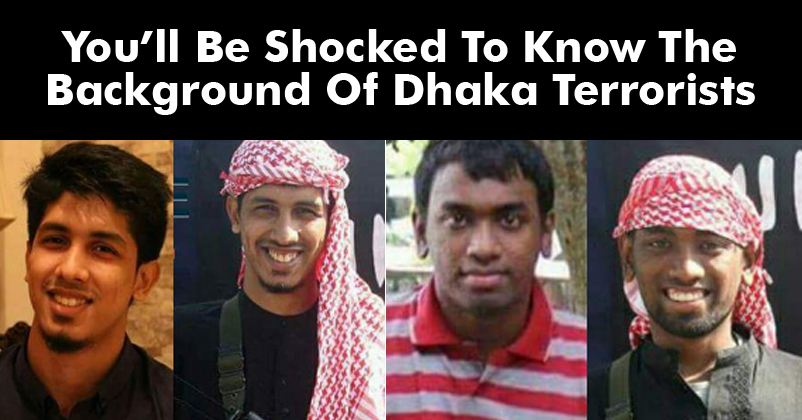 In a world where everyone believes that everything they see is just black and white, the recent Dhaka Terror Attacks proved them just so wrong. Terrorists have no religion, race, color, creed and CLASS.

Many of us believe that it’s very easy to lure young unemployed youth in the name of religion to become terrorist for an illogical and detrimental cause. But after Dhaka Police released the pictures and background profile of Dhaka Terrorists, it’s now clear that even the finest of brains in the country can be brainwashed in the name of religion.

In a twist of tales, it has been reported by the Bangladesh Home Minister Asaduzzaman Khan that the terrorists who attacked on Dhaka restaurant were members of the Jamaeytul Mujahdeen Bangladesh, a group which has been banned in Bangladesh for more than a decacde. Earlier there were speculations that they were the members of ISIS. According to Dhaka Police, all the 5 terrorists held Bangladeshi citizenship and were in their early twenties who belonged to affluent and rich families. One of the terrorist’s name was Nibras Islam.

He went missing from Uttara on February 3rd. And it’s shocking to see that he studied in Turkish Hope School and later studied in North South University, a top ranked university in Dhaka. From there, he took admission in Monash University to pursue higher education.

Here is a video clip where he is seen talking to his friend in his car. While watching the video it hardly seems like this boy could do such horrific actions which shamed the entire human race. True, even the educated ones are not always the wiser ones.

After further investigating his Facebook profile which is now deactivated, we found out that he had once met Actress Shraddha Kapoor. The name of the second terrorist identified was Meer Saameh Mubasheer. Here is a picture of him. Meer Saameh Mubasheer was a class 11 (A-level) student. It has been  found that even he went missing from Gulshan area between February 29 and March 1 when he was on his way to coaching center . He studied in Scholastica, another top English medium school in Dhaka. His friends stated that Meer Saameh Mubasheer’s family was very “strict and religious”, and he was always a shy person.

The name of third member is Rohan Ibne Imtiaz

He is the son of S.M Imtiaz Khan Babul who is the leader of the party’s Dhaka City chapter and Deputy General Secretary of Bangladesh Olympic Association. Even Rohan Ibne Imtiaz had completed his A-levels from Scholastica. His mother is a teacher at that school.

Abhijeet Bhattarchya Abused Her, What She Did Next Was Simply Amazing
You Would Be Shocked To Hear The Reason Why The Accused Killed The Infosys Techie