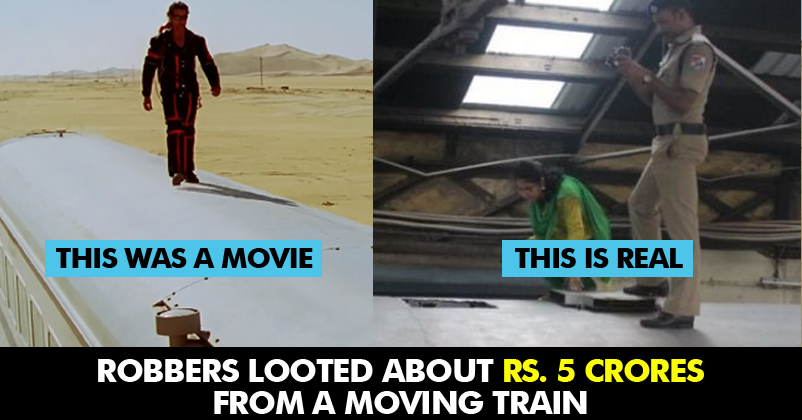 Reel life is something that can inspires and motivates us to do something beyond we can even think about it. It helps us to aim higher and achieve our goal. But the reactions in response to such movies or charismatic acts differs from person to person. It’s upto us how we interpret it.

Admit it that we all wanted Hrithik Roshan not to get caught in the Dhoom 2 movie. Somewhere deep inside our mind,we do want the evil to win over good. This is because somewhere we feel like being bad is the ‘cool’. But at the end of the day, it is just against the law and we should respect and abide by it. Recently a similar case has been reported where a train ‘Saleem Express’ travelling from Saleem to Chennai was robbed which was transporting the soiled currency notes of the Reserve Bank of India. The value is estimated to be worth of Rs 5.75 crore. The robbery was executed by cutting down the roof and then breaking two of the 226 wooden trunks on board on Tuesday. The trunks were in two bogies that were sealed from outside. The total value of money travelling in that particular train is estimated to be 342 Crores. The officials got to know about the robbery when the Salem Express reached Chennai at 3:52 am in the morning. However people have started to smell something fishy as those trunks were given heavy tight security of 15 armed policemen which almost diminishes any chances of drilling a hole on the roof and execute the robbery. The guarding of trunks was commanded by the assistant commissioner of police himself. Investigation has taken place where the police is trying figure out how and from where did the robbers boarded the train which will lead them to further clues. They have taken over the CCTV control of all the railway stations which comes between Saleem and Egmore in Chennai. According to police investigation it is believed that the robbery must have taken place when the train was between Salem to Virudhachalam, as after that particular station, almost all the tracks along the route had been electrified with 25,000 volts with cables stretching right above the carriages.

During investigation, blood has been found in the compartment where the robbery took place which suggests that one of the robbers might has been injured either in a scuffle or while executing this dangerous robbery. The forensic department has also recovered four pairs of fingerprints from the crime scene.

Another theory that has been suggested is that the robbers might had sneaked into the compartment at Salem before it was sealed and then later cut their way out with the loot. Whatever the possibilities are, one thing is for sure that this robbery will be counted in one of the most organised crimes in the history of India which in no way is a compliment ( remember ! some people perceive things differently ). If you have your own theory regarding this topic, share your opinion with us in the comment section below.

The Cost Of This Selfie Is Whopping Rs.8 Lakhs, What’s So Special In It?
Shah Rukh Khan Detained At US Airport Once Again & In Frustration, Tweeted This