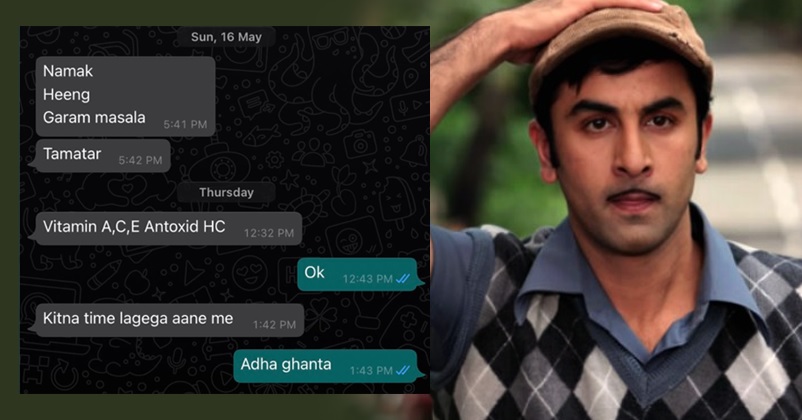 Twitter is one of the best places to share things about life and recently a Twitter user started a trend in which she asked everyone to tell they are married without telling that they are married. She also posted some screenshots of the WhatsApp chats which she had with her hubby and in most of the chats, they were talking about the groceries and other things which are required for a family.

It is completely true that life changes after the marriage and it changes in a big manner after the couple becomes parents and we are quite sure that every married person will find it relatable.

Soon, Twitterati started expressing themselves in funny manner and while some shared their own lists and chats, few other praised the couple. Check out some of the selected reactions:

It won’t be wrong to say that there are a lot of options for entertainment on Twitter as many interesting trends can be seen on the micro-blogging site. If you remember, some time ago, a person asked everyone to tell that they are middle-class without saying that they are middle-class just by posting photos. In another instance, a person started a trend in which he shared items which were used by desi mothers for beating their kids such as umbrella, stick, slippers, etc. and people not only laughed out loud but also added their input.

Girl Tweets “Sarso Ka Khet” Is A Perfect Place For Romantic Date, Twitter Reacts
Girl Asks Mom To Find Her A Boyfriend, Twitter Goes Crazy On How Her Mom Roasts Her With Swag