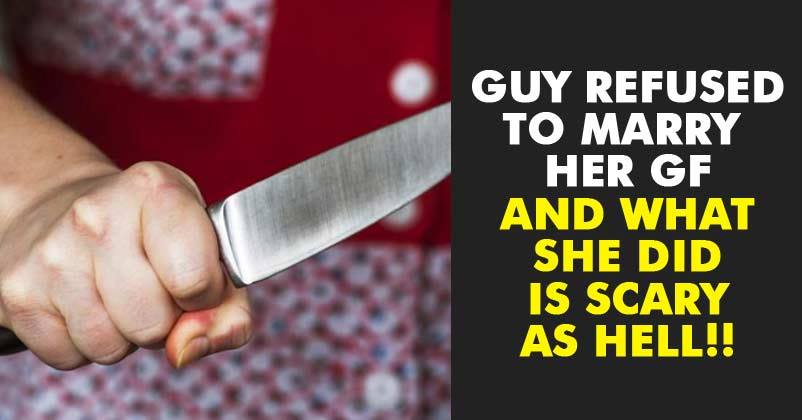 Sometimes such incidents take place which compel us to think as to where the world is heading. We have always been concerned about the safety of women and have tried to seek measures to reduce crimes against females; however, there are some women in this world from whom men need to save themselves.

Yes, you read it right! At least, this incident proves so!

A 23-yr lady from Delhi chopped off the genitals of her boyfriend after he refused to marry her. She lives in Mangolpuri and has been in a relationship with a street vendor named Ravi (35) for the last four years; nevertheless, whenever the issue of marriage comes up, he denies by giving the excuse that his family will not agree for this wedding. On Wednesday night, the lady’s sister-in-law called Ravi and asked him to visit them at their home. Ravi went there and once again, the issue of marriage turned up which resulted in a fiery squabble.

As per the victim, he was then pushed inside the bathroom by the lady and she undressed him, demanding him to get physically intimate with her. She tried to threaten the victim by showing him a knife and warned him of severe consequences if he didn’t fulfill her demand. When Ravi didn’t give up, she chopped off his genitals. The lady’s brother and sister-in-law were also there when she attacked Ravi.

Ravi ran out of the house, bleeding and shouting; he was lucky enough that the neighbors not only informed the police but also took him to Sanjay Gandhi Memorial Hospital. Ravi was referred to Jaipur Golden Hospital subsequent to undergoing a surgery.

Police has formed teams to catch the lady and her family as they have been absconding since the attack.

Shocked and speechless! What about you?

Government Declares Another List Of 30 Smart Cities! Check Out Which City Topped The List!
Yogi Govt’s Masterplan To Stop Female Foeticide In UP Is An Inspiration For Other Govts