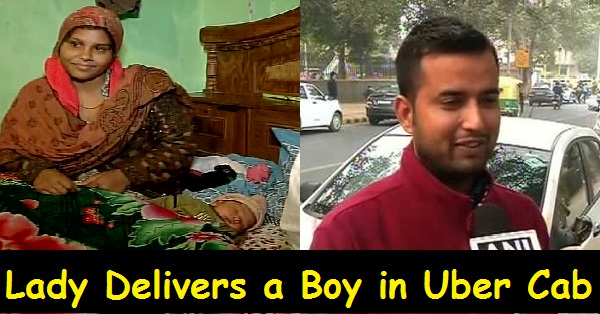 A woman, Babli in New Delhi has given birth to a baby boy in the Uber cab which was hired on Thursday after repeated calls for an ambulance service went unnoticed. The pregnant lady was accompanied by 2 females from her family on their way to Safdarjung Hospital situated in Ansari Nagar of New Delhi. But due to heavy traffic they stopped in between and Babli delivered a baby boy inside the cab itself with the help of cab driver Shahnawaz Khan and the other two ladies. Driver provided cloth and other necessary things which were present in his taxi. Soon the driver along with the lady rushed to the hospital and she was taken to emergency ward.

Talking to ANI the lady said – “I named my child after Uber as the baby boy was born in Uber Taxi.”

Woman delivers in Uber cab on her way to hospital after being helped by the driver, names her new-born baby 'Uber'. pic.twitter.com/5TERHEwGMg

Driver Shahnawaz Khan spoke to ANI – “I picked the lady from Devli region of Delhi & there was a lot of traffic on our way to hospital so I helped the lady who was in severe pain. My mother will be very Proud of me and I did it out of Humanity.”