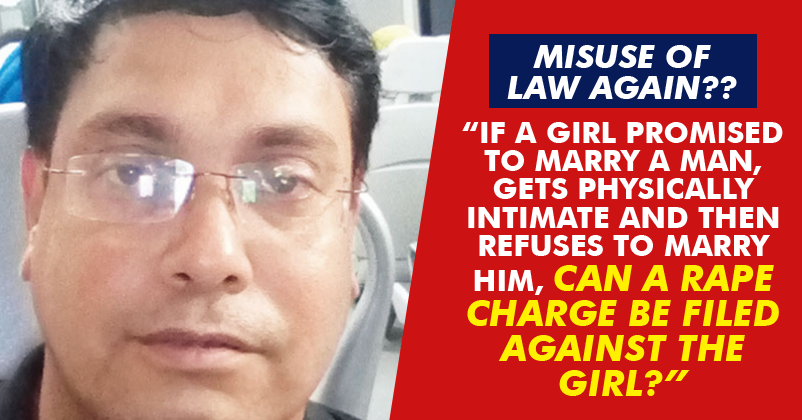 Rape cases are very common these days; however, a strong reason is needed to file one. Women accuse men of rape when they are dumped after having physical relation; in short, these cases are filed when the relationship is “Forceful”.

However, in case of Arnab Ganguly (43), a resident of Delhi, things were the other way round. A woman, who was working as an HR in Arnab’s call center first promised to marry him and after they had a physical relationship, she backed off and filed a rape case against him. In spite of being innocent, Arnab had to spend not 1 or 2 but 8 months in Tihar jail. Arnab said that the lady shared her personal life with him and also kept complaining of her painful marriage; Arnab, who is also divorced since 8 years used to tell her ways to sort out things.

After the duo got involved in a physical relationship, Arnab asked the woman if she’s ready to divorce her husband so that they could take the next step. At that point, the woman agreed to marry him. Arnab says,

“We got physically intimate only after she assured me of marriage. I told her that if she is serious about the relationship, we should take it a step forward.”

Later, after Ganguly shifted to Kolkata, he was royally ignored by her; the lady wouldn’t even answer his calls. Arnab stated,

“I told her I would come to meet her and her family on March 6 of last year and talk about marriage. But four days before my ticket to Delhi, the Delhi police arrived at my house in Kolkata and arrested me on rape charges.”

Now, Arnab has approached PM Modi for justice; he asks,

“If a girl is in a relationship with a man, promised to marry him, gets physically intimate and then refuses to marry him that happened in my case, can a rape charge be filed against the girl?” He even approached the Women and Child Development Ministry for assistance; how far is this law justified? It was the woman who backed off, but still Arnab had to face the troubles. Shouldn’t there be some rule for women too? How can women escape safely?

Share your views about the same in our comments section below.

This Kerala Bar Sought The Best Jugaad To Skip SC Rule, Built A 250M Maze From The Entrance!
Most Horrifying Thing You Will See On Internet Today! Bus & Car Caved Into Road In Chennai!