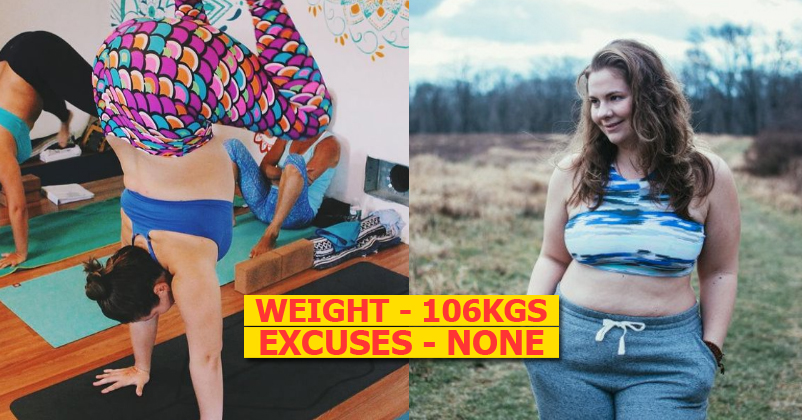 This woman who weighs more than 106 kgs will leave you speechless with her unique yoga techniques and her name is Dana Falsetti. Dana Falsetti who is 22 years old has now turned into yoga guru for thousands and lakhs of people from around the world. Dana Falsetti has been suffering from an eating disorder and now she opens up about how yoga helped her to beat this unique craving and how it has transformed her life. Dana Falsetti shared about her dedication to yoga that has completely changed on how she viewed her body and self-worth. With more than lakhs of Instagram followers, Dana Falsetti has shed more than 70lbs from 300lb frame. Dana also shared that when she actually started doing yoga she doubted if she would be able to do some advance yoga steps but due to her dedication she has mastered all the steps in yoga that are unbelievable to achieve. Dana said ‘My practice was and is the self-care I always needed,’. However, she admitted that she thought her body was in the way, constantly telling herself that here ‘belly was too big to fold forward’ or her ‘thighs [were] too big for binds’. Dana who frequently keeps posting her images on social media has helped thousands of people to lose weight and practice yoga with full concentration and determination. The social media star said at first she had no idea there was such a large community of yoga practitioner on Instagram.

‘Yes, I get hit with nasty comments on a regular basis because I show my body proudly and my body doesn’t make everybody happy,’ she said. ‘But I don’t care, because these comments aren’t about me at all.’ Said Dana

At the age of 10, Dana remembers some incident and said “I kept eating and then when I got to college as a freshman I was 300 pounds and at my heaviest. It wasn’t until then that I realized that most of the food I ate was a result of binge-eating.”

At first, she started off with Anusara yoga classes so that she could work on mastering the foundational poses, such as downward dog, child’s pose, and warrior one. But as early as her 10th class, Dana noticed herself easing into more poses. Feeling her body becoming stronger and more flexible—not necessarily leaner—is what ultimately kept her going. Months of practice later, Dana was able to do the most difficult and advance poses of yoga. Are you inspired by her?

Continue Reading
You may also like...
Related Topics:This Woman Who Weighs More Than 106 Kgs Will Leave You Speechless With Her Unique Yoga Techniques

Secrets Revealed! Here’s Why Iranian Women Are So Beautiful! Check Out!
These Pics Of Barack Obama’s New House After His Term As President Will Make You Jealous!