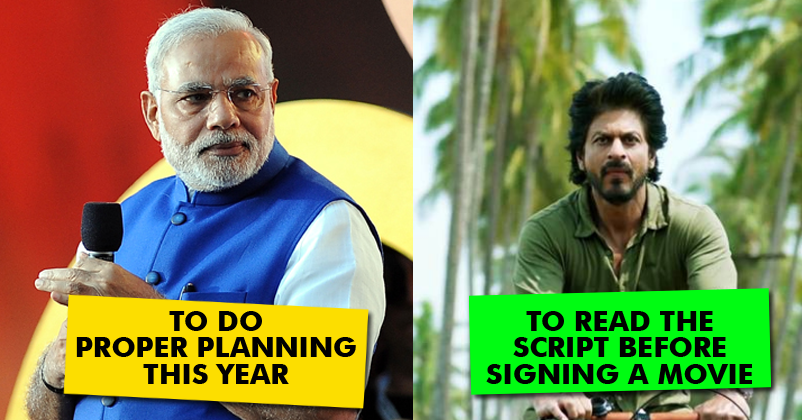 It’s the third day of the New Year 2017 and almost everyone is out of party mode and thinking of making this year special. Many people are habitual of making New Year Resolutions and breaking them with time but some stick to it as well. Resolutions can be of many types, such as hitting the gym regularly, quit smoking, studying hard, not watching much television, avoiding junk food, etc.

Nowadays, people also post their New Year Resolutions on the social media networks to let their friends know about them and also ask about their resolutions.

On January 1, micro-blogging site Twitter was abuzz with tweets on New Year Resolutions which gave an idea to Viral Fever to modify it but with a funny twist and they took a jibe at celebrities by imagining their resolutions and soon #CelebrityResolutions2017 started trending.

Here are some of the selected tweets which will make you go ROFL:

How can we forget RaGa:

I'll Do These Kind Of Exposes In Temples So That There're No Shoes For People To Throw At Me. #CelebResolutions2017pic.twitter.com/NHcr7gMekw

Many tweets were made in connection with the new year resolution of Salman Khan!

Salman Khan: I won't let my driver drive my car and run over people.#CelebResolutions2017

Not to forget King Khan:

And God of cricket:

KRK- No more reviews this year.#CelebResolutions2017.

Do you also have suggestions for New Year Resolutions for celebs? Share with us in the comments section below.

Exclusive Bigg Boss 10! This Time The Captaincy Task Is Accompanied By A Huge Twist!
Meet Suhani Bhatnagar, Young Babita Phogat In Dangal! She Looks Like An Angel In Her Pics…