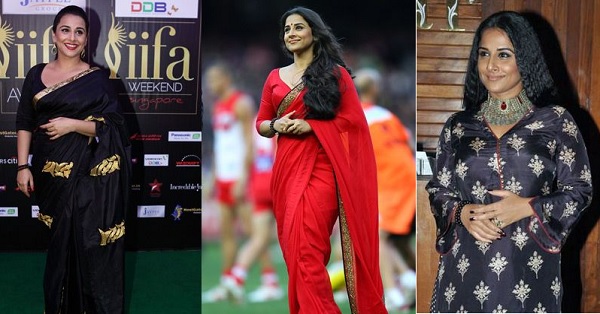 Popular actress Vidya Balan is of the opinion that people should get rid of those stereotypical notions about their looks. She further adds that she loves wearing sarees but is often questioned by people with regards to her looks. People often comment that Vidya looks quite older than her age when she wears sarees. To that, she replies that she loves wearing sarees and would continue to wear them. She adds that “Its not about driving home a point or feminism but just being true to yourself.” She is of the opinion that as compared to strangers, judgments from family and friends affect women’s lives more. Now, with the popularity of social media, even friends who are not in touch with you since 10 years would comment on your looks.
Apart from that she has raised her voice against prohibited entry of women in South India temples. Vidya says that the age-old practice of not allowing women to enter the temple during menstrual age was unfair. Women and men must get equal opportunity at work as well as in social life. On being asked about her opinion on the controversy that surrounds entry of women in South Indian temples, she states that she hopes to see some changes in this lifetime.
Recently, Kerala government has told the Supreme Court that prohibiting entry of women of menstrual age in Sabarimala temple is completely a matter of religion and it protects the devotees’ right to practice the religion.
Vidya adds that women have created many barriers for themselves. She gives an example of how some professions are just reserved for men, while keeping women only in the background.