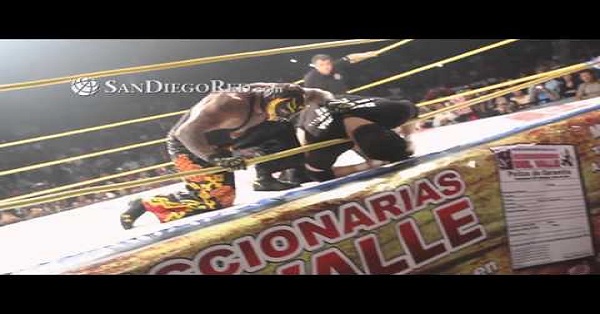 Would you believe me if I say Rey Mysterio is a killer. Yes, Rey Mystertio has accidently killed a top Mexico wrestler.

El Hijo del Perro Aguayo, one of the Mexico’s top stars, died earlier this morning due to injuries caused to him after the signature move 619 was performed on him by Rey Mysterio. This news has been confirmed by Mexico-based AAA and CMLL professional wrestling promotions.

Rey Mysterio who recently left WWE was competing his first match since leaving WWE. He was competing in a tag team match with Xtreme Tiger taking on Perro Aguayo Jr and Manik. During the match, Rey performed his signature move 619 on Perro, after which Perro was left unconscious. It’s possible that Perro Aguayo suffered the spinal trauma while taking the bump to the floor and then worsened the injury by coming back in and taking the dropkick.

Once the match was over, the medical staff came to the ring and took Perro to the Ambulance.

Have a look at this incident below:

All we can say is RIP Perro Aguayo.

Man Rapes 18 Month Old Baby Goes To Jail & Gets Raped By 20 Prisoners TWICE
The Chocolate Boy Of Bollywood, Shahid Kapur All Set To Get Hitched