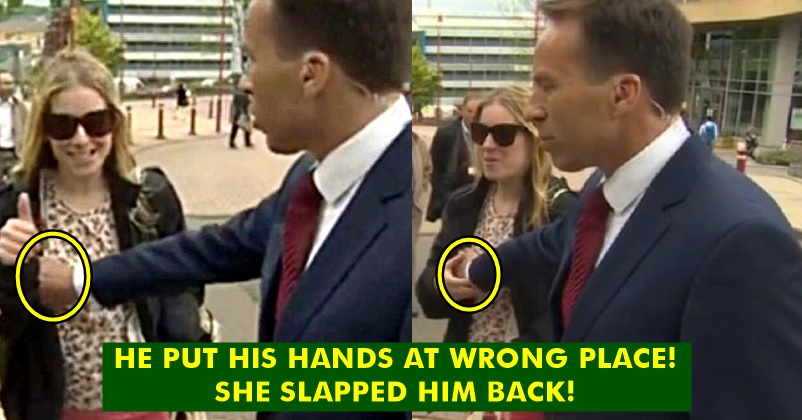 Live TV gets the channels more eyeballs, but it’s far more difficult to manage it compared to recorded broadcasts. One mistake and it hurts big time. There is no scope of any problem in Live especially in this age of Social Media where everything goes viral instantly.

While we are talking about avoiding small mistakes, there happened a big blunder when BBC reporter accidentally pushed a woman with her breast Live on TV.

The incident happened when Ben Brown, A BBC reporter was Live interviewing the assistant political editor, Norman Smith. This is when a woman member of the public came into their shot and while trying to be the astute professional by palming her off, Ben, unfortunately, suffered poor hand placement.

You can also watch the video directly on YouTube.

The woman who was clearly annoyed hit Ben on the shoulder and walks off in a huff.

Here is how people reacted –

you'll find it hard to justify physically moving someone away, let alone by grabbing an intimate area. pic.twitter.com/lCI9JQ7zAF

Are you for real? She slapped his shoulder because he grabbed her breast… I'd of given him a black eye!

Why put hands there in the first place tho? also once you put your hand there you knew what you was touching why not take your hand off?

You looked first at where you were putting your hand! How can that be unintentional?

No need to explain to us…………if she makes an official complaint as a crime you can explain it under caution.

Well, this clearly looks like a publicity stunt to us because one just can’t act ignorant to such accidents. If Ben pushed her accidentally, the least he could do next was saying sorry. How much effort it takes?

Continue Reading
You may also like...
Related Topics:BBC, World

Shraddha & Arjun Kapoor’s Heartbeat Challenge Tells Us Many Secrets & You Need To Know!
McDonald’s Latest Ad Is Criticized Heavily On Social Media & Will Fill You With Disgust