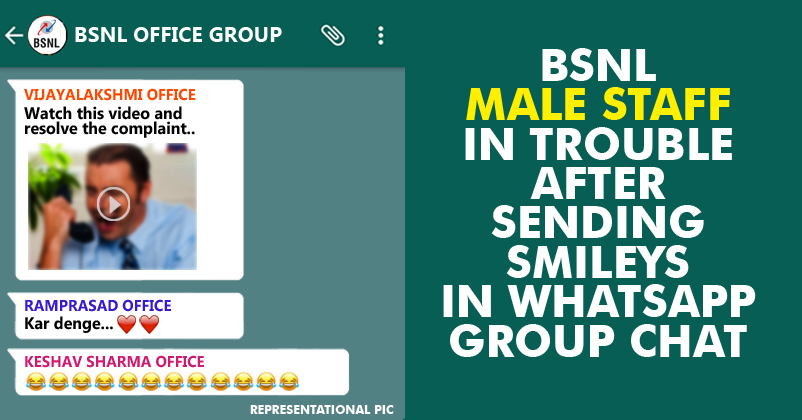 Smileys are one of the best ways to convey emotions, as there are many things which can’t be expressed in words. What’s more, a single smiley has the ability to articulate innumerable emotions for which one may need hundreds or thousands of words. The same is the reason as to why the usage of smileys is increasing day by day in not only informal chats but also formal communication. However, a group of BSNL employees landed in a big trouble when they sent a smiley to a female colleague in an official WhatsApp group.

Yes, you read it right! As per the complaint filed by the divisional engineer L Vijayalakshmi at Tuticorin south police station, some employees of BSNL sent smileys to harass her after she sent a video of a grieved customer and asked them to sort out the matter. She went on to state that a person known as Linga Bhaskar sent smileys just for harassing her which made her feel humiliated and uncomfortable.

Police acted on her complaint and an FIR was lodged against 49 employees of BSNL. They all were booked under Scheduled Caste and Scheduled Tribes (Prevention of Atrocities) Act, Tamil Nadu Prohibition of Harassment of Women Act and Information Technology Act.

In order to get the FIR cancelled, the accused employees approached Madras high court Madurai bench and filed a petition.

When the case came for hearing in the high court before Justice P N Prakash, the lawyer of the accused stated that none of these three acts could be applied to the complaint in this case. The lawyer further claims that as per the law, a person has the right to express his/her opinion and feelings on the social media networks and this will never result in harassment of anyone. BSNL has also conducted an internal departmental inquiry in which all the allegations were not considered enough to claim that the lady engineer has been harassed. The lawyer of the accused demanded the cancellation of the FIR filed against his clients and the court did cancel it.

2 People Arrested For Not Standing Up For National Anthem, Is National Anthem The Only Criteria?
Pune IT Employee Accepted Friend Request Of A Foreigner Girl & She Duped Him Of Rs 11 Lakhs!