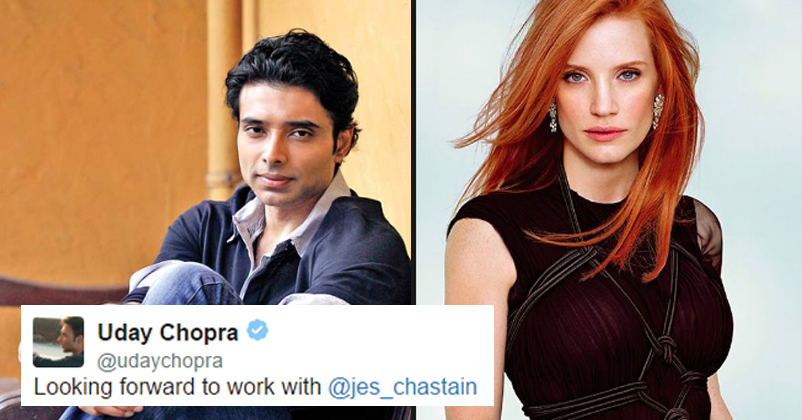 Uday Chopra may not have been able to make it Big in Bollywood as an actor but he is all set to start his career as a producer soon. Uday who is known for his work in Mohabbatein, Dhoom series will be leading the Hollywood branch of YRF to co-produce the upcoming film ‘Seducing Ingrid Bergman’ starring two-time Academy Award nominee and Cannes jury member, Jessica Chastain. Looking forward to work with @jes_chastain

Following this, many Bollywood stars wished him best for his first Hollywood project.

The dream finally becomes a reality.

Congratulations @udaychopra … looking forward to this one.

Huge congratulations uday!!! This is an exciting project! https://t.co/4fseb3NAxg

The film is reportedly based on the romance between Casablanca actor Ingrid Bergman and war photographer Robert Capa that began in Paris immediately following World War II.

As per a report in Deadline, Uday Chopra who is now the CEO of YRF said that Jessica was the perfect casting.

“Jessica is the perfect actress to star in Seducing Ingrid Bergman. Jessica is no stranger to portraying strong, intelligent women and this role deserves an actress of her immeasurable talent. We also feel that she will bring a unique perspective as a producer,”

YRF Entertainment will be financing the project and Jonathan Reiman will take up the role of executive producer for the film. Director of the film is not finalised yet but it will be on board soon.

We are super kicked for this amazing upcoming project and wish the team a bundle of luck.

Ranveer Singh Promoted Sachin’s Biopic With An Epic Video! Sachin’s Reply Was Mind-Blowing!
Reebok Launches Zoku Runner In India In Style! The Rap Song Will Make You Hear It On Repeat Mode!