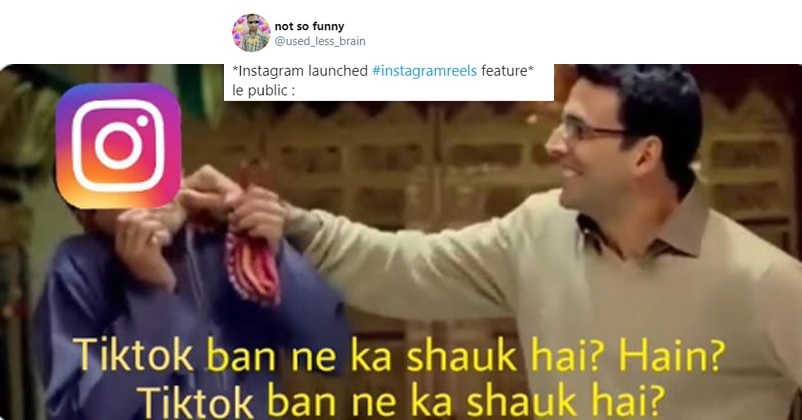 The atmosphere in India is very much against China after 20 Indian soldiers got martyred in the clash which took place between the Indian Army and THE Chinese Army in Galwan Valley, Ladakh. It is being said that the casualties were quite high on the Chinese side but China decided to remain mum on this matter instead of revealing the details.

TikTok was one of the most popular video platforms where people used to post short videos. Many celebrities such as Yuzvendra Chahal, Shilpa Shetty, Zareen Khan, Shahid Kapoor, etc. were also on the video platform.

While the ban was supported by a majority of the Indian public, those TikTokers who were earning their bread and butter from the app were left upset. Well, the good thing is that there are some Indian apps too such as Roposo and Mitron which can easily replace TikTok; nevertheless the TikTokers went crazy when Instagram launched a new feature known as Reels.

Reels gives a platform to its users for creating and posting 15-second videos just like TikTok. While the TikTokers loved it as Instagram is a very popular brand, the original Instagram users were not happy with this new feature.

The micro-blogging site Twitter got flooded with memes and jokes on this topic soon and you just can’t miss these rib-tickling memes:

Instagram launched #Reels in India after the ban of tiktok
Le memers and public : pic.twitter.com/Cj4SLRD98n

Le Adam Mosseri after copying all features from tiktok to #instagramreels #instagram
😂😂😂😂😂😂😂😂 pic.twitter.com/NCxMV58r6H

Mark Zuckerberg to all the #memers – pic.twitter.com/F3sBIjcbET

Twitter Breaks Into Rib-Tickling Memes As ICSE Results Are Out, These Tweets Are Quite Relatable
Happy Twitter Reacts With Memes As Russia Completes Human Trials For Coronavirus Vaccine Safely