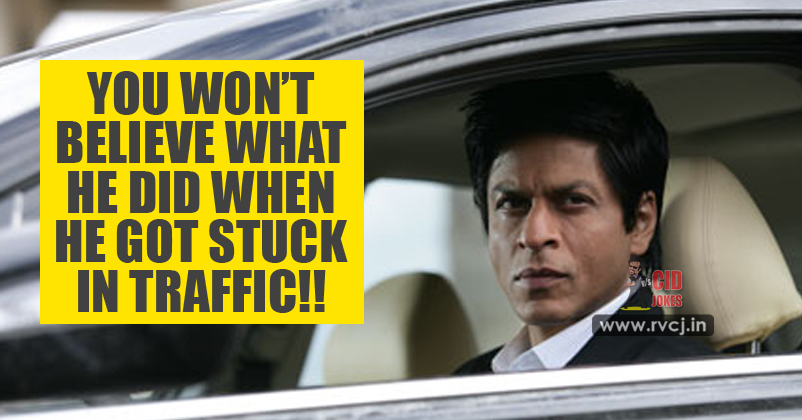 Traffic jam is definitely one of the biggest problems that people living in Indian metro cities have to face and the most horrible fact about it is that it can take you hours to reach a place where you would have reached in some minutes. The public of Mumbai is also well acquainted with the traffic jams and as per a study, an average Mumbai commuter spends 3 hours in a day just in travelling.

While an average commuter tries to pass his time of travelling by listening to music or playing Sudoku, the King of Bollywood Shah Rukh Khan doesn’t want to waste time and you will be surprised to know what he did when he got stuck in traffic. This is what SRK tweeted:

Couldn't take the traffic so flying back from work. The dimples r because I don't have to worry… https://t.co/CCHxAxrH3Z

SRK posted this pic on Instagram with caption, “Couldn’t take the traffic so flying back from work. The dimples r because I don’t have to worry about finding restrooms along the way!!!” Yes guys, the 50 year old Baadshah took a plane ride to his home on being stuck in the traffic! Well, this shows how grandly he lives his life!

Continue Reading
You may also like...
Related Topics:You Just Won’t Believe What Shah Rukh Did When He Got Stuck In Traffic

Class X Girl Who Died Before Results Has Done Something Which Would Make You Respect Her!
Modi Ji Is Truly An All-Rounder! This Video Is A Proof Of His Talent And You Can’t Afford To Miss It!