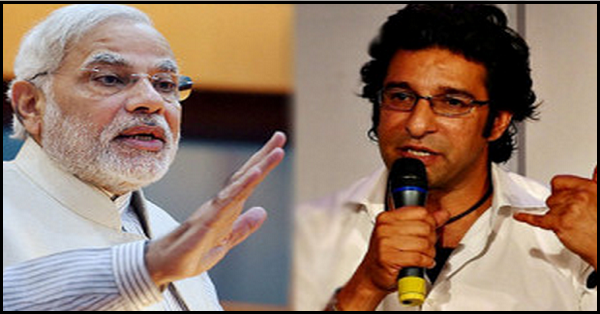 The former Paksitani cricketer Wasim Akram as requested Indian Prime Minister Narendra Modi to bring an end to the ongoing cricket boycott of Pakistan by India as it is not only hurting the fans of both countries but also the fans around the globe.

India decided to trim all sporting ties with Pakistan after the Mumbai attacks of 2008 which were done on the behest of militants living in Pakistan. Since 2007, both the countries have not played any full series, however a limited over series was played in 2012 and Pakistan is waiting for New Delhi’s answer about the full series which is scheduled to be played in United Arab Emirates in December.

However, the recent violations of ceasefire and firing on the border have decreased the chances of the series to be played, but Wasim Akram said that he is hopeful that Modi will give the green light.

Wasim told AFP, “I request Prime Minister Modi to clear the tour. I heard that he told his cabinet that he doesn’t have any problems in playing sports with Pakistan so cricket should flourish.”

He further added, “What I have noticed is that PM Modi is striving to make India a superpower and they are cricketing superpower so they have a duty to look around the world and cooperate in others’ progress so I am sure he will okay the series. It’s the loss for the cricketing world which has a small base. India-Pakistan is the ultimate contest and I grew up dreaming to feature in an India-Pakistan match.”

He talked about 1999 tour of Pakistan in India when he was the captain of Pakistani team; Pakistan defeated India in two out of three tests. He said, “We went to India under severe threats but what happened to us there is history. We were accorded a warm welcome everywhere we went and the love and affection was unbelievable.”

He also talked about the India’s tour of Pakistan in 2004, he said, “The same thing happened when India toured Pakistan in 2004 and even now when I tour India as a commentator people meet me with great affection and they ask me why are we not playing cricket.”

He also added, “Billions enjoy Indo-Pak matches and its intensity outmatches every other rivalry as no team wants to lose and no fan wants to see his team lose, so I sincerely hope that everything is set aside and cricketing ties go on uninterrupted.”

Darren Gough Trolled MS Dhoni By Showing Off His Ducati But Dhoni’s Counterblast Was Awesome
De Villiers In Trouble, May Get Suspended