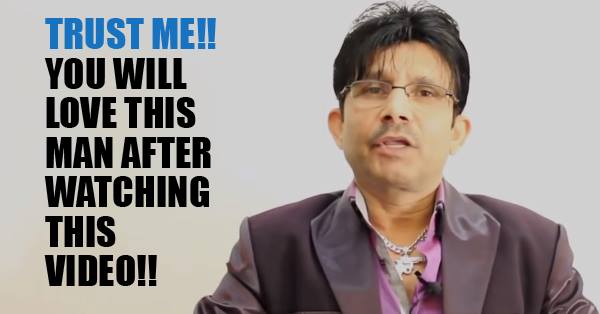 KRK has so far reviewed movies or started controversies by making obscene, illogical and disgusting tweets about other celebrities. What’s more, he always tries to prove that he is a very big celebrity and he has lot of fans. However, the reality is a little different from what he tries to prove, but may be after watching this video, people may start liking him, some may become his fans because for the first time KRK is Being Sensible.

In this video, KRK reviews the statement of King Khan of Bollywood, Shah Rukh Khan which he gave in an interview to a new channel on his 50th birthday, which has created quite a furore and has become a controversial matter.

He has deeply analyzed the whole statement, how the statement was manipulated and how the matter was being blown up by the TRP hungry Indian Media.

Watch the video and do let us know what you think of what KRK said!!

Must Watch One Of The Most Sensible Videos Ever From KRK That Will Actually Make You Like Him For The First Time:

What are your views in this connection after watching the video? Share your opinion in the comments section below.

Do You Know What’s MOTORBOATING In S*X? Watch It & Know Your S*XICONS! Thank Us Later
This Video Of “DJ Waale Babu” In The Form Of A Bhajan Is All You Need To Listen Today