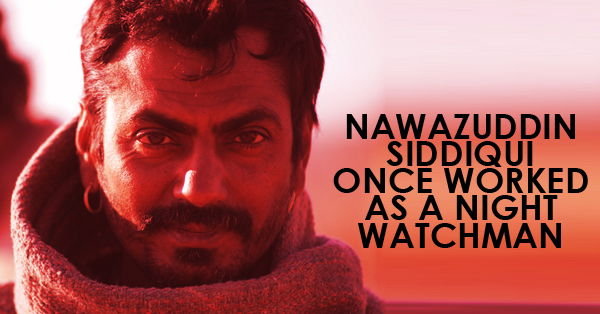 Bollywood has a simple rule, if you are born with silver spoon in your mouth, you are going to be a star no matter if you can do your job well or not. But there are those who work really hard to reach to that zenith where they can be called as superstars. We have created a list of some superstars who did pretty odd jobs before they become famous in the Bollywood Industry.

Here is the List of 10 Bollywood Celebs who did pretty odd jobs before they become famous.

Nawazuddin Siddiqui was born in a Uttar Pradesh in a farmer’s family and has eight siblings. He worked as a chemist in the city before he moved to Delhi. He used to work as a watchman to earn his bread and butter in the capital city. While working in Delhi he developed interest in Theater and later joined The National School of Drama. Before coming to Bollywood Boman Irani was a waiter and also worked as a room service attendant in Taj Hotel Palce, Mumbai. He also learned photography before joining Theater. After that there was no looking back for him. At the age of 18, Sidharth used modelling as a part time option to earn some pocket money and later after four decided to quit because of his dissatisfaction with the profession. Buy later he worked in Karan Johar’s My Name Is Khan as an Assistant Director. He used to work as a copywriter in advertising agencies like O&M and J. Walter Thompson. The Megastar Amitabh Bachchan’s worked as an executive in a shipping firm. Later on he worked as a freight broker in a different company named Bird and Co. He also auditioned for a radio announcer in All India Radio but was rejected due to his voice, which supposedly was not appropriate for the job. Akshay Kumar went to Bangkok to learn Martial Arts, after he earned a black belt in Taekwondo in India. He worked as a chef and waiter in Bangkok. Later when he returned to India, he became a Martial Arts teacher and one of his students helped him to get a modelling assignment. His father owned large orchards and was a fruit merchant. Dilip Kumar before coming to Bollywood started a business of supplying dry fruits in Pune. Arshad Warsi worked as a door to door cosmetic products salesman. He also worked in a photo lab. Since he had a keen interest in dancing, he went on to join Akbar Sami’s Dance group in Mumbai from which his career of dancing and choreography picked up. He was also an assistant to Mahesh Bhatt for films “Thikana” and “Kaash”. The renowned director who directed Milkha Singh’s biopic Bhaag Milkha Bhaag and blockbuster like Rang De Basanti once used to serve tea on film sets and also worked as a vacuum cleaner salesman to earn his bread and butter. Want to share your thoughts about this. Let us know in the comments section below.

Continue Reading
You may also like...
Related Topics:bollywood, Nawazuddin Siddiqui, You Won't Believe What Jobs These 10 Bollywood Celebs Used To Do Before Becoming Famous

10 Hollywood Movies To Look Out For In 2016
From Mangal To Dangal: This is How Dangal’s First Look Was Welcomed On Twitter