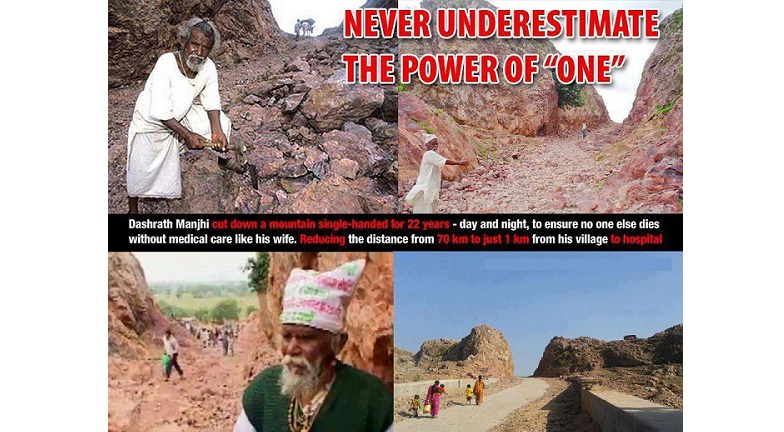 People consider Shah Jahan the greatest lover for he made Taj Mahal in memory of his loving wife Mumtaj. But here is a man, Dashrath Manjhi who has proved himself to be even greater because he broke a mountain alone in 22 years just with a chisel and hammer and without taking a single rupee coin from anyone to make road for love of his wife. Folks earlier considered him mad but he said that he would live forever and would not die. True, now he has become immortal and is alive in the memories, praise, blessings and love of the whole Bihar. One day, when he had gone to the other side of the mountain to cut wood, his wife was trekking up the mountain to bring food for him. She fell down, the pot broke and she got hurt badly. This made the man extremely worried and he thought about making a road through that mountain for the sake of his family, the village and the whole district and to uplift the whole human race. The road is 25 feet high, 30 feet in breadth and 360 feet in length. Now everyone worships him but yes, after he left the world. When he was alive, people used to make fun of him.

This gem of Bihar is still breathing in the reminiscences of people and would ever be!