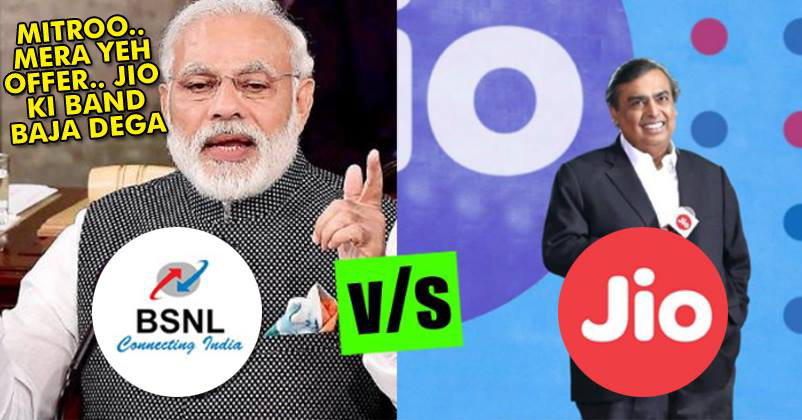 The lucrative offers given by Reliance Jio to its customers have compelled other telecom operators to change their market strategy and cut down rates of calling and internet packs. Now the government-owned telecom operator Bharat Sanchar Nigam Limited (BSNL) has also reduced their 3G mobile internet rates and that too, by three-fourth!

Yes, you read it right! Now it is offering one GB data for just Rs. 36 under a special scheme. BSNL issued a statement which said,

BSNL will offer four times data under Rs. 291 plan and for the same price, users will get 8GB (3G) instead of 2G for a period of 28 days. The company has doubled the data in Rs. 78 plan and that too, in 2G and not in 1G as earlier. BSNL said,

“With these offers BSNL is now offering data at the rate of Rs. 36 per GB which is one of the lowest in the Industry.”

This is not the first time when the government-owned telecom operator has cut down its rates. Last month also, it launched a Rs. 144 monthly prepaid plan which gave its customers unlimited local and STD calls for a period of 28 days. The offer is still working for both types of consumers and it also comes with 300 MB free data. In the words of RK Mittal, BSNL Board Director for Consumer Mobility,

“We are committed to providing affordable mobile services for all segments of the prepaid mobile customers. These offers will be valid from February 6, 2017, on Pan India basis.”

As of now, Jio consumers may not fall for BSNL offers as they will need to pay for them but after March 31, Jio will also start charging, so in long run, BSNL may be a better option.

What do you say? Share your views in the comments section below.

Shocking! Indian Army Was Paying This Huge Sum As Rent For A Land In PoK For Last 16 Years
Angry Salman Khan Wished To Slap Varun Dhawan For Calling Him This