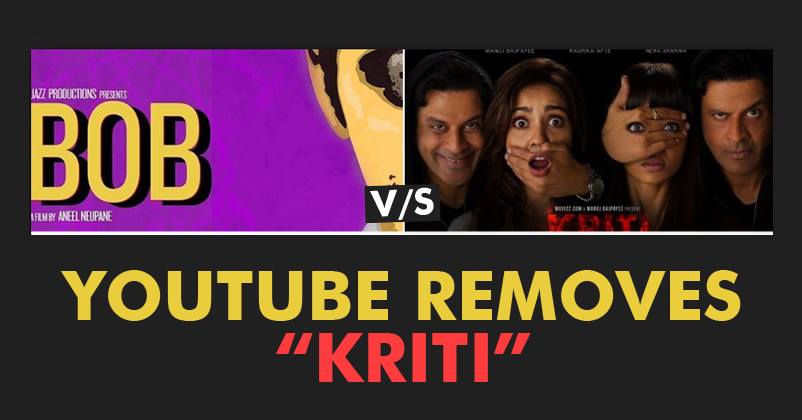 It is always seen that the rich is victorious over the poor, isn’t it? Well YouTube didn’t let this happen. It has taken a decision and you are surely going to praise it for that. You must have surely heard about ‘Kriti’ a short film by Shirish Kunder. It had received a lot of appreciation from movie critics as well as Arvind Kejriwal on Twitter.

But do you know that it is a copy of the film ‘Bob’ directed by Nepalese director Aneel Neupane?

Yes, Aneel submitted all proofs and after being convinced YouTube removed ‘Kriti’. Aneel stated that ‘Bob’ was a low budget film and proper marketing wasn’t done owing to lack of funds. He adds that the ‘Bob’ was released in October 2015 itself on Vimeo, a private video network and was shared with friends and family.

On the other hand Shirish has slapped a legal notice and said that all his claims are false. Now he seeks an ‘Unconditional written apology’ from Aneel and adds that he hasn’t watched any such video before.
The notice reads “Kunder completed shooting the film in February 2016. It then went into post-production and was published on June 22, 2016″ “Now, I have no idea how to go about on this. I’m angry not because Mr. Shirish Kunder practically stole the plot and made it into his film. I’m angry because We didn’t even have lunch money while shooting BOB, and a spot boy for Kriti probably made more money than BOB’s entire budget. My team and I didn’t work our asses off just so some rich dude from India could turn it into this and get away with it. That’s just not fair.”

‘Kriti’ video had crossed 2.5 million views on YouTube but after these proofs from Aneel, YouTube finally removed it. Let us wait and watch as to what the court has to say because this is going to take long time to resolve in actual!

Man Did Something With His Phone On Jet Airways Flight! Guess What, He Got Arrested!
Police Officer Hung Himself In Front Of Wife! How And Why This Happened Is So Shocking!