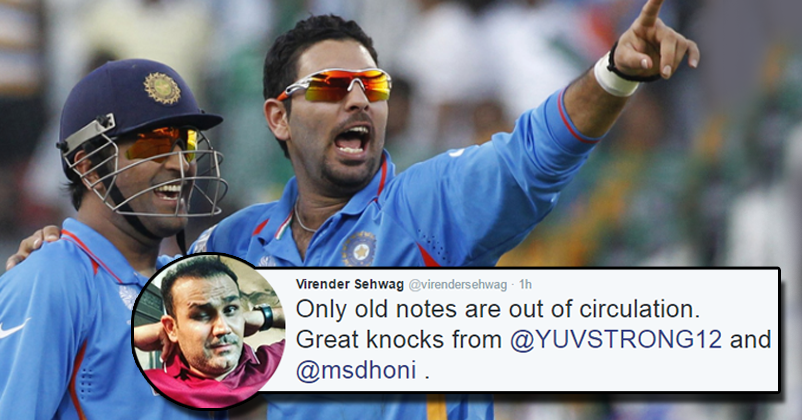 Yuvraj Singh and MS Dhoni proved that they can do anything and everything. In the 2nd ODI match against England, the duo hit powerful centuries, which helped India score a fantastic 381!

The Barabati Stadium started roaring with slogans and cheers when this partnership started taking a successful turn. Fans loved Yuvi-Dhoni’s 256 run partnership in 38 overs; it was indeed a “Paisa vasool” moment for them. Virat Kohli was dismissed quite early, which disappointed fans a bit, but once this epic partnership started, there was no looking back. Yuvraj scored 150 runs, with 3 sixes and 21 boundaries and on the other hand, Dhoni made 134 runs, with 6 sixes.

They recreated the 2011 World Cup winning partnership at Wankhede, wherein Yuvi was titled “Player of the Tournament”. Dhoni and Yuvraj have created a difficult situation for England by making a HUGE total, do you think they will be able to chase?

After this superb performance, Twitterati went crazy; celebs and cricketers couldn’t stop praising them. Have a look at their reactions!

Only old notes are out of circulation.
Great knocks from @YUVSTRONG12 and @msdhoni . pic.twitter.com/A87EmghpV8

Nostalgic to watch this partnership of Yuvraj Singh and Dhoni again. The 2011 winning moment partnership.#INDvENG

Had said before this series that for people like Yuvraj, it was about form and fitness, not class. Saw that today

So Dhoni still has it. And yes, @YUVSTRONG12 too. Champions both.

No one can stop a champ!

What an amazing partnership between a superstar and a rockstar!! We enjoyed the show 🙂 @YUVSTRONG12 @msdhoni #INDvENG pic.twitter.com/mU8o3iJfZi

So guys, do you have any message for the champs? Do share in our comments section below…

Kohli All Set To Defeat Sachin Tendulkar! Already Broke A Big Record Of The Master Blaster!
Virat Kohli Is The Reason Why Yuvraj Singh Did NOT Take Retirement From Cricket