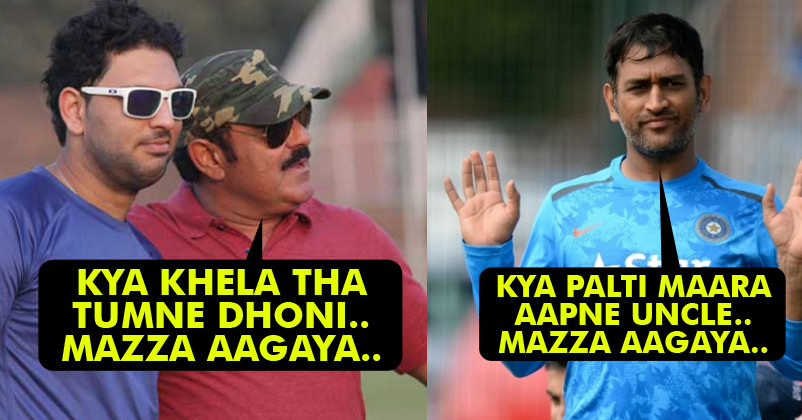 All of us know the kind of relationship that M.S Dhoni and Yuvraj Singh’s father Yograj Singh share with each other. Time and again, Yograj Singh had lashed out at M.S Dhoni for his son not getting selected in the Indian Cricket Team. According to Yograj Singh, M.S Dhoni used to had an uneven equation with Yuvraj Singh which led to his exit from the team. But now, according to Yograj Singh, it is all in the past and he has now forgiven M.S Dhoni after his partnership with Yuvraj Singh in the 2nd ODI against England where the duo helped India sail through the innings with a mammoth score of 381. The forgiveness from Yograj Singh’s side came as surprise for us all as his harsh words thrown at M.S Dhoni weren’t that light. Yuvraj and M.S Dhoni made a partnership of 256 runs where Yuvraj Singh made a quickfire 150 runs follwed by M.S Dhoni’s sensible innings of 134 runs. After the match, Yograj Singh showed his support for M.S Dhoni. This is what he said.

The way both of them (Yuvraj and MS Dhoni) batted and rescued India, this had made me forgive Dhoni. The way the duo batted and supported each other, this showed their love for each other, their love for the country. This was the most beautiful partnership I have ever seen…I’m glad that Dhoni also scored his century. He deserved it. Well, that was indeed quite mature of him to praise M.S Dhoni’s effort instead of bringing another rift and negative environment.

However, he also added, “Only thing that hurts me is that we wasted a lot of time. We could have won the 2015 World Cup if he would have been in the squad. Dhoni’s burden could have been shared”

When someone from the media asked him about him being critical of Dhoni, he completely denied the allegation and made himself clear.

And I was never critical about him (Dhoni). According to me, being a captain he should have gone to the selectors and should have said that I need him (Yuvraj) in the middle order. But unfortunately he wasted 2-3 years of Yuvi’s cricket career. Better late than never… Well, it seems that the matter has been now settled between them and since the duo is back again in form like the old golden days, it will be now hard for their opponent to suppress them and their partnership. What do you think about Yograj Singh’s U-Turn. Please share your opinion in the comment section below.

Virat Kohli Is The Reason Why Yuvraj Singh Did NOT Take Retirement From Cricket
This Tweet By Sushant Singh Rajput Is By Far The Best On Yuvraj’s Superb Inning!