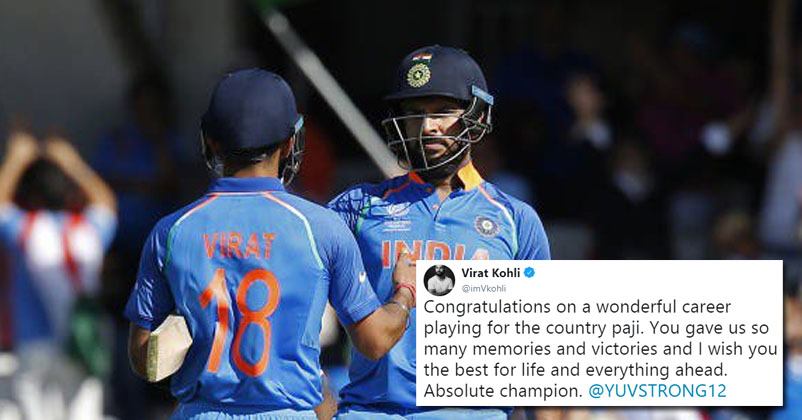 Indian cricket team player Yuvraj Singh announced the end of his cricket career in a heartfelt press conference in Mumbai. Yuvraj held a press conference on Monday and confirmed his retirement from all types of rival cricket. After the announcement, a short video was played showcasing his relationship with his parents.

During the press conference, Yuvraj had a hard time holding back his tears as he became very emotional. “I have been playing international cricket on and off for 17 years. Now, it is time to say goodbye, to move on and walk away. It has been a roller coaster ride and a great story but it has to come to an end,” said Yuvraj.

“This is the best time to move on,” he added.

While the news saddened all his fans, it also deeply affected his cricketer friends. Other players like Virat Kohli, VVS Laxman, took to Twitter to congratulate him on his successful career and paid their tribute to India’s 2011 World Cup-winning hero.

Suresh Raina even called it end of an era.

Congratulations on a wonderful career playing for the country paji. You gave us so many memories and victories and I wish you the best for life and everything ahead. Absolute champion. @YUVSTRONG12 pic.twitter.com/LXSWNSQXog

It’s been an absolute pleasure playing with Yuvi. You will go down as one of the greatest players in the history of the game. You have been an inspiration to us with your resilience,determination & above all the love & passion you showed towards the game. Good luck @YUVSTRONG12 ! pic.twitter.com/vlXUdkgJSz

Players will come and go,but players like @YUVSTRONG12 are very rare to find. Gone through many difficult times but thrashed disease,thrashed bowlers & won hearts. Inspired so many people with his fight & will-power. Wish you the best in life,Yuvi #YuvrajSingh. Best wishes always pic.twitter.com/sUNAoTyNa8

One of the greatest match-winners in the history of the game,a fighter who built an extraordinary career through difficult challenges & came out a winner every time-We all are so proud of you #YuvrajSingh , u can be very proud of what u have you done for our country @YUVSTRONG12 pic.twitter.com/w4wUe31De0

Thank you for the service you have done to Indian cricket. A true champion who carried himself with decorum at all times. You made memories on the field and off which we as Indian fans shall always cherish. It’s Time.. #Yuvrajsingh #YuvrajSinghRetires #jerseyno12 pic.twitter.com/3Iu11LjegP

One of the most talented Indian batsmen…one of the biggest match-winners. Go well, Yuvraj Singh. May your second innings be as swashbuckling as the first one☺️🤗 #ThankYouYuvi

End of an era! Yuvi pa, ur ability with the bat, the glorious 6s, the impeccable catches & the good times we've had, will be missed beyond years. The class & grit u brought to the field will be an inspiration forever. Thank u, @YUVSTRONG12 Have an equally remarkable 2nd innings! pic.twitter.com/ZWNeC9WkZL

Yuvi can. Yuvi did. Always.

Yuvraj Singh holds the record of making six sixes in an over and fastest fifty in just 12 balls, in the same match, at the 2007 T20 World Cup.