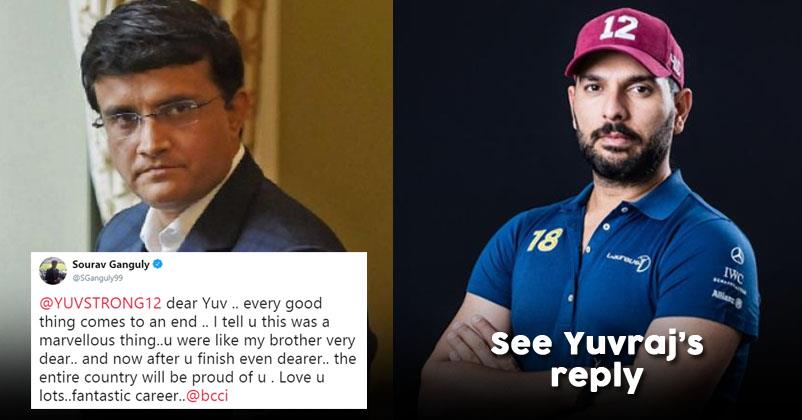 Indian cricket team player Yuvraj Singh has announced his retirement from all types of competitive cricket in a press conference on Monday in Mumbai. This news left everyone in tears and his fans are pouring their heartfelt wishes for him. But among tons of congratulations and best wishes, former Indian cricket team captain Sourav Ganguly’s tweet caught a lot of attention.

Dada was the team captain when Yuvraj made his debut for his country at the age of 18. Gradually they became very close and the strongest pillars of the Indian batting line-up. Ganguly supported players like Virender Sehwag, Harbhajan Singh, Zaheer Khan along with Yuvraj, who went on to become some of the best players in the world. Time and again they have acknowledged his role in their successful career.

When Singh’s huge announcement came, Dada also congratulated him for his triumphant inning and wished him best for the future. He wrote that the entire country will be proud of him.

@YUVSTRONG12 dear Yuv .. every good thing comes to an end .. I tell u this was a marvellous thing..u were like my brother very dear.. and now after u finish even dearer.. the entire country will be proud of u . Love u lots..fantastic career..@bcci

Yuvraj also replied to his mentor and first captain, on Twitter and wrote, “Thanks Dadi for giving me an opportunity to play for India and live my dream 🙏 you will always be special to me”