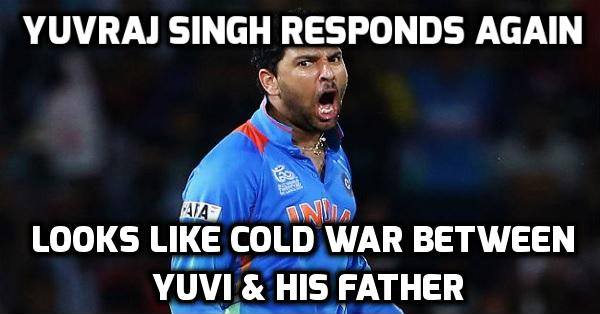 Almost all of us have seen the clip in which Yograj Singh, Yuvraj’s father, have abused Dhoni terribly, crossing the limits. And that too at a time when Dhoni is stepping the stairs of happiness for being blessed with a baby girl. His pain is natural but cursing someone beyond imagination is not fair Mr. Yograj Singh.

Quite naturally, this is high time when Yuvi must focus on practices for IPL. At the same time, expectations are quite high from him because he has been paid the highest amount among all the cricketers playing in IPL. It’s a very big and important moment for him for making a national comeback but it is said that whenever you concentrate on something good for your life, devil of distraction would create hurdles in your way. Probably from this perspective, Yograj Singh is said to be that distraction in Yuvi’s life whose statements have compelled him for responding again. Doesn’t it all look like what happened a few months back? YES, EXACTLY! Yuvi, for a second time, takes resort to Twitter so as to give an expression of his being innocent together with declaring that he is not at all linked with what his father said.

Firstly, Yuvraj made his part clear that he has got nothing to do with what all is going on as well as articulated that he does not have any problem in playing under MSD.

Iv got nothing to do with statements coming out in the media ! As iv said before enjoyed playing under dhoni no issues at all

Afterwards, he expressed his desire of meeting Dhoni personally in a tweet and congratulating him on becoming dad.

I look forward to meet msd and congratulate him on becoming a father !

However, followers will keep on mocking Yograj Singh on social networking sites.