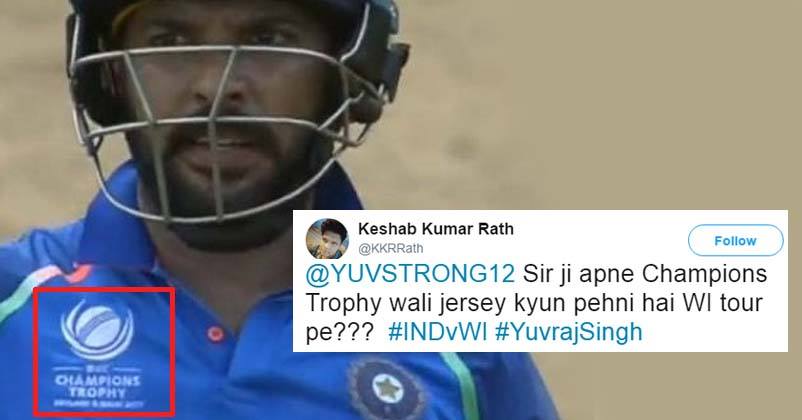 India had an amazing victory against West Indies yesterday as they beat them by 105 runs.

After winning the toss, India opted to bat first and scored 310 runs in 43 overs. Ajinkya Rahane made an astonishing century and Virat Kohli scored 87. The overs were cut short due to rain. On the other side, Team West Indies could score only 206 runs and lost the match. Bowler Kuldeep Yadav took 3 wickets in his first match.

However, more than the victory of India, it was Yuvraj Singh’s jersey that became the talk of everyone. The left-hand batsman came to bat wearing the Champions Trophy jersey in the bilateral series match, which surprised quite many people on Twitter. Here’s how they reacted to it-

Any guesses why Yuvraj Singh came out to bat by sporting Champions Trophy jersey? https://t.co/qG2yseS3UY pic.twitter.com/4PRJyUqiwU

Well, seems like it was a bad day for Yuvraj as apart from wearing a wrong jersey, he also failed to perform well. In 10 balls he scored just 14 runs and went back to the pavilion.

But, Yuvraj, as we all know, is a tiger and he will make a strong comeback soon. The series is going to continue for quite some time and we believe he’ll surprise everyone with his batting.

What do you think? Share your thoughts with us.

Continue Reading
You may also like...
Related Topics:cricket, Yuvraj Singh

Revealed: Here’s What Kohli, Yuvi & Shoaib Malik Were Discussing After ICC CT Final!
What Dwayne Bravo Did With Indian Team After Indians Defeated West Indies Will Make You Respect Him!