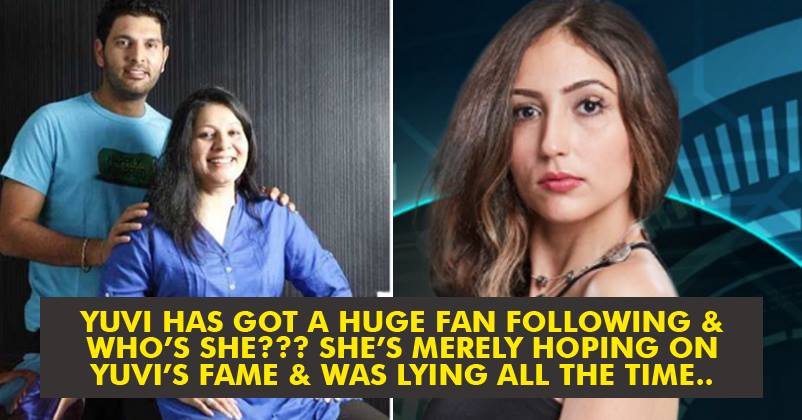 Akansha Sharma had created enough chaos in the Bigg Boss 10 house, since the time she entered. Everyone was surprised when Akansha stated that she is the estranged wife of Yuvraj Singh’s brother, Zorawar Singh. Moreover, she blamed Yuvraj Singh’s family, especially his mom, Shabnam Singh for her unhappy marriage. Akansha and Zorawar’s marriage lasted for just 4 months! Every now and then, Akansha keeps making allegations on the cricketer’s family, which obviously is not going down well with anyone. After Priyanka Jagga, it was Akansha who got evicted from the Bigg Boss house this week.
However Yuvraj’s mom is not going to tolerate Akansha’s non-sense anymore; she has decided to file a defamation case against her, for making those ‘False allegations’ and maligning the family’s image. “Why do you think she got eliminated? It’s not just because she wasn’t playing the game well but it was due to the fact that she was discrediting Yuvraj, who is a national hero. Obviously, there was public outrage as his fans didn’t like it and voted her out. Yuvi has got a huge fan following and who’s she? She’s merely hopping on Yuvi’s fame and was lying all the time. We will take lawful recourse.”

Shabnam has hired Daman Bir Sobti, a Chandigarh-based lawyer, for handling the case. The lawyer said

“Yes, we will be filing a civil suit for damages and a criminal complaint for defamation. We will take video footage from the Bigg Boss house for further proof. She (Akansha) has also been giving a lot of interviews post-eviction. Shabnam will be coming to Chandigarh to discuss the matter with me.”

Although Shabnam is quite busy with Yuvraj’s marriage preparations, she will ensure that proper action is taken. Akansha had also accused Yuvraj of substance abuse, which further infuriated Shabnam.

She said “My son has given his blood, sweat and tears to the nation, this is insulting to him.”. Yuvraj hasn’t discussed this matter with Shabnam Singh yet because he doesn’t prefer getting into all these matters. But one thing is for sure; if Yuvraj posts even 1 tweet about this, he will get the support of millions of his fans. Talking about doping, the lawyer said

“Can an international player be on dope? He’s got the World Cup for our country, he has survived cancer because of his good health. He’s a teetotaler, how can he be doping? In fact, she was suspected to be on dope and has been given a fair chance by way of counseling.”

Akansha had also claimed that the family would make her starve for money and would give her just Rs 3,000 every month; but no, this is wrong. Sobti said that Singh family would pay her Rs 20,000 every month through RTGS. Although the marriage ended in September 2014, Akansha got money till April 2015. In spite of all this, Akansha had given them that ‘Media threat’.

“Akansha herself said that the marriage was on a rebound after her breakup, and on grounds of indifference and mental cruelty Zoravar filed a divorce petition, which is pending in Chandigarh.”

Remember, Akansha had also said that the whole family accompanied them to the honeymoon? Sobti gave clarifications on the same and said;

“Shabnam and the Singh family had a strong suspicion immediately after the wedding that Akansha had some kind of substance abuse issue. They spoke to her mother, Monica, who admitted that her daughter had a problem. It was on Monica’s request that they should not leave her (Akansha) alone, that Shabnam bore all the expenses and both the mothers went with the couple to Goa. We can share evidence with air tickets and bank account statements showing the monthly money transfer”

Now, this is completely opposite of what Akansha had stated! Let’s see what action the family takes. What do you think about this? Do share your views in the comments section below.