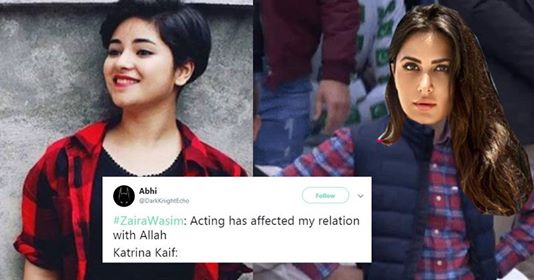 Dangal actress, Zaira Wasim quits after being 5 years in Bollywood. She explained in a lengthy post how her career is coming in between with her ‘imaan’ and religion and she chooses her religion over her career. A fair choice I guess. A person should be able to choose and do what he or she wills. But is her decision right? This news is not going well with netizens, people are trolling her for her short span in Bollywood.

Disgusting to see some ‘liberals’ supporting her decision to quit films due to ‘religious reasons’. We know she has been under pressure from religious extremists. Instead of encouraging her to be fearless and progressive, you support her in going backwards..!! 👎 #ZairaWasim

Dear #ZairaWasim I respect your decision of quitting movies. I don't agree with the reasons that you've given. I think you're an incredible actress and you can do so much more with your career.

I genuinely hope you'd rethink and continue to pursue Acting…

#ZairaWasim: Acting has affected my relation with Allah

*A random Mullah says something against Nusrat Jahan'a Sindoor and Mangalsutra*

RW-Liberal :This is not acceptable, Her Life, Her Choice,respect her.

RW-Liberal : This is radicalization, Islam and Muslims and Kashmiris are fanatics and Blah Blah.

#ZairaWasim and #NusratJahan
1 nation , 1 religion and 2 perspectives.
One showed regressiveness of her community ,beliefs n thoughts

And the other, though from the same community, is being praised for living the true Indian spirit without 'Damaging her relationship with Allah' pic.twitter.com/oBGy4XPg58

To all hindu brothers and sisters let her live her life the way she wants so don't interfere.
Do your own work. #ZairaWasim@ZairaWasimmm True inspiration.
It is not easy to quit.

In the end, it’s her decision and she is an adult capable of making her own.

Smriti Irani Just Shared A Scene From Sacred Games, Can She Be Any Cooler
10 Evergreen Singers Who Once Ruled In Bollywood