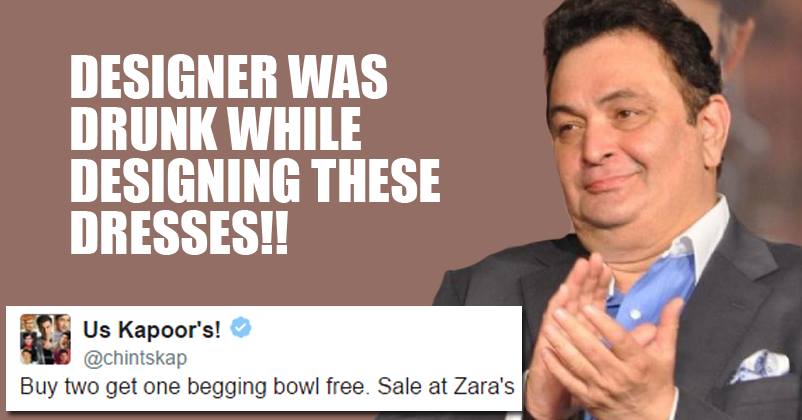 These days , fashion has changed to a great extent. Yes, it has changed so much that there is hardly any ‘decency’ factor left in it! Now, Rishi Kapoor has taken a perfect dig at modern-day fashion. Often, Mr. Kapoor is seen taking to Twitter for sharing his opinions, observations or random thoughts. Now, he thought of tweeting about the ‘New’ fashion these days! Yes, he cited Zara as an example, as this is the brand which has become quite popular among youngsters. See his tweet;

Wasn’t it a hilarious tweet? Well, even we had posted a similar meme on our page few days back, remember? Have a look… It seems that after seeing these clothes designed by Zara, even Rishi Kapoor couldn’t stop comparing it to the clothes worn by beggars! For the new generation it might be fashion, but for Chintuji it is nothing more than a torn piece of cloth. He has taken a sly dig at Zara, by saying that these clothes offered on sale come with a free begging bowl. Even Karan Johar agreed to this tweet of his! See what he tweeted!

Even other people started trolling these clothes’ designs along with Rishi Kapoor. Have a look at their hilarious tweets!

Should be put under golf clothing!

They should of put that in the sports section under the golf clothing. Then called it a hole in one sale!!!!

So guys, what is your opinion on this? Don’t you think Rishi Kapoor has tweeted the actual reality of fashion clothing these days? Do let us know your comments in our comments section below.

You Just Can’t Miss How Hilariously Twitter Reacted To PM Modi’s Interview With Arnab
REVEALED: Here’s The Truth Behind This Viral Hoax Post! Wait & Read Before You Share It More