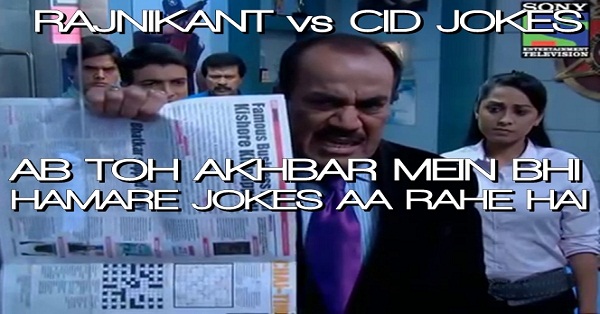 It has been 18 years since the first episode of this show was premiered. Over the period this show has become famous all over the internet for the CID Jokes. The crime detective series is known for its characters like ACP Pradyuman, Abhijeet, Daya, Dr. Salunkhe who overcome each and every challenge put in front of them. In every episode, the team gets successful in their task by tracking criminals, led by the smallest of clues. They risk their lives, hell they even cheat death in the line of duty. ACP Pradyuman and his team of officers use Dr. Salunkhe and Dr. Tarika’s help and solve various cases.

So here are the 10 CID Jokes That Will Make You Laugh Hard! Enjoy! 2. Fredericks, the only guy on the team that doesn’t care about the seriousness of the case. He even cracks jokes when the murderer is on the loose. 3. How could you do that? One doesn’t simply forget inviting ACP Pradyuman to a party!

4. ACP Pradyuman knows how to make his presence felt in the atmosphere! 5. Now there’s a book that you must read before dying. Written by our own Senior Inspector Daya. If you lost the key to your door then JUST BREAK IT! 7.  This is exactly what happens during the confession part. First they beat you, ask you to crack a joke, and then beat you again for cracking a bad joke. 8. Dr. Salunkhe is solely responsible for the demise of Nestlé in India. He was the one who first discovered the lead content in the Maggi. 10. Beware Rajnikant Vs CID Jokes team! CID is coming for you!

16 Reasons Why You Should Watch Baahubali!!
LIVING LIFE KING SIZE : Story Of An MNC Guy In PUNE