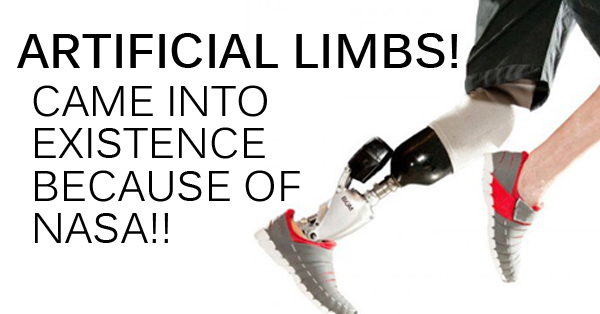 The National Aeronautics and Space Administration (NASA) is the United States government agency responsible for the civilian space program as well as aeronautics and aerospace research. With an annual budget of more than $18 billion, NASA made some really important discoveries over the years.

With around 200 NASA satellites orbiting the Earth everyday, this technology has made it possible for us to stay in touch with people on the other side of the globe instantaneously. NASA formed a union called the Environmental Research Aircraft and Sensor Technology. Its goal was to build a remotely piloted aircraft, made to fly unmanned at high altitudes. The technology was to be flown using solar power so as to not add weight to the aircraft. Because of this invention, millions of homes are now equipped with crystal silicon solar power. Artificial limbs came into existence as a result of the advancement of artificial muscle systems for use in NASA space robotic and extravehicular activities. NASA needed a special coating to protect space equipment from dirt found in the space environment so they came up with their special plastics coating.

NASA uses infrafred technology to measure the temperature of stars. With this technology, we now have the ear thermometer which captures our body temperature using infrared sensors that detect the amount of energy given off by the eardrum. NASA invented the first adjustable smoke detector to let astronauts know if there was fire or if noxious gases were loose in Skylab, the first US space station.

When man was about to land on the Moon, NASA needed equipment astronauts could use to get rock and soil samples. NASA, together with Black and Decker, figured out that attaching a cord to a drill would be difficult for the astronauts so they invented a battery-operated motor drill. Astronauts needed something to keep the water they bring to space clean. NASA invented a filter with activated charcoal that contains ions to neutralize pathogens in water and now we have the water filter. NASA did major research on space food in preparation for the Apollo missions, and together with Nestle, came up with Freeze Drying – a process that involves dehydration of food to make it more convenient for transport. Software Engineers at NASA have designed thousands of computer programs since its inception. The NASA Structural Analysis Program is one of the most widely-used programs, utilized to design Cadillacs, roller coasters, and much more.