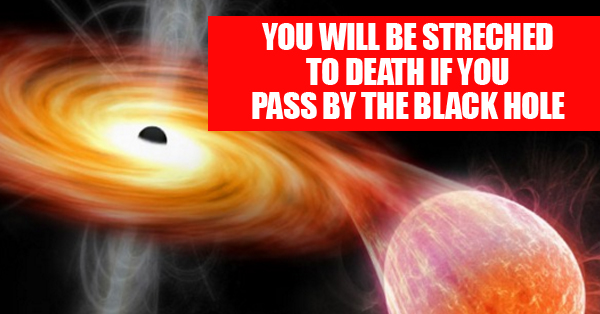 A black hole is  a region of space time with a very strong gravitational force that even the light cannot escape from the inside of a black hole. Black hole can as big as millions of sun together or as small as a atom. Here is a list of 10 crazy facts about black holes.

1. Black holes decide the number of stars in the galaxies 2. Laws of physics don’t work at the center of a black hole Source
According to some theories, a black hole is crush matter to infinite density. When this happens, the laws of physics break down because it is not possible to conceive of anything with a zero volume & infinite density.

3. Any matter like Iron can become a black hole Source
Most people believe that stars are the only things that can convert into black holes. If your car were shrunk down to a infinite small point and still able to retained all of their mass, Its density would reach tremendous levels which would make its force of gravity strong enough to become a black hole. Source
To pull light into itself a black hole should have enough gravity. Black hole has to contain a enormous amount of mass in a small space.

Source
Albert Einstein only revived a theory about black holes in 1916. In 1783, John Mitchell was the one who developed the theory after he wondered if its possible that a gravitational force could be so strong that even particles of light couldn’t escape from it.

7. You’ll be killed in horrible way near a black hole Source
Although it obvious that a black hole will probably kill you, most people think they would just get crushed by the black hole. But that isn’t true, your body would most likely get stretched to death. Source
When collapses of the core of a star happens, the star start rotating faster and faster and also becomes smaller and smaller. But then it reaches the point where it doesn’t have much amount mass to convert into a black hole, it gets squeezed together and form a neutron star and also continues to spin rapidly. Same thing applies to black holes.

9. Massive black hole at the center of the Milky Way galaxy Source
The one in the center of the Milky Way is one of the biggest discovered yet. It’s 30,000 light years away from us and is more than 30 million times massive than our sun.

10. Black hole near to the Earth Source
The nearest black hole to our earth is 1,600 light years away.

Continue Reading
You may also like...
Related Topics:10 Facts About Black Holes You Didn't Know

10 Animals That Are At The Verge Of Extinction And You Never Knew They Ever Existed!
10 Bizarre Curses Of Hindu Mythology That Will Leave You Awestruck!!!