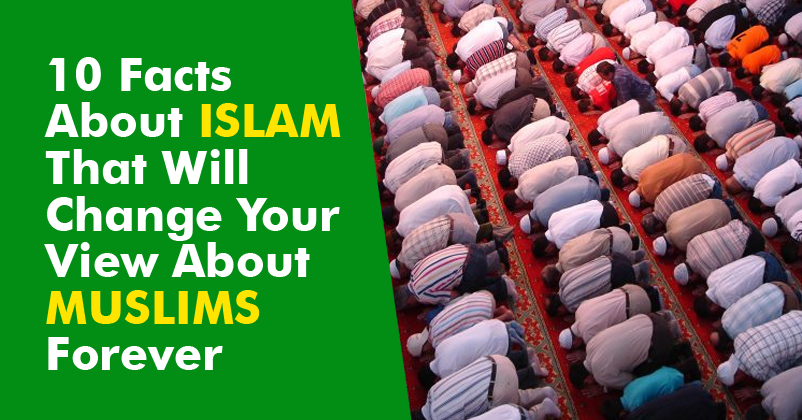 A man’s religion is what separates him from other animals. Man, being a social animal, is supposed to follow a set of rules. It is his religion that binds him to the right path and avoids him from the evil. Nowadays however, a religion is blamed for the wrongdoing of its followers. Every religion ultimately only teaches a human to live and let live. Not knowing a religion is often the only reason why people have a negative mindset about a particular religion. Same goes with Islam too. Islam more often than not gets blamed for what it never taught its followers by people who hardly know much about Islam. A few rogue spots have spoiled the name of the whole clan and set a completely contradicting image for Islam. That image is needed to be cleared and thus here is a list of 10 facts to clear the most common misconceptions that people believe to be true. It is often believed that children are not given any rights in Islam. The fact however contradicts this misconception. Children, according to Islam, have a right to be properly brought up, raised, and educated well in every aspect. It is the responsibility of an adult to make sure that children grow up into a moral and ethical adult. Islam doesn’t allow adults to hit children in the face or hit with anything larger than a pen. They are even allowed to strive for their share if the parent disagrees to feed them. Many consider Prophet Muhammad (PBUH) to be a pedophile. It is true that he married a girl aged nine but that does not stand as pedophilia. Pedophilia is described as, “a psychiatric disorder in which an adult or older adolescent experiences a primary or exclusive sexual attraction to prepubescent children.” The girl whom Prophet Muhammad (PBUH) married had attained puberty 3 years before marriage. Puberty as a criteria for girl’s marriage was accepted since Biblical times. The marriage thus was never opposed by the society during that time and on the contrary was welcomed by the girl and her family. Islam also discards forceful marriage under any condition. It is believed that Muslims are barbaric and unethical during a war. The Islamic rules for a Muslim army during a war completely discards this misconception. A Muslim army is supposed to obey the following 10 rules during a war:

1. Never commit treachery
2. Be good to the prisoners
3. Do not mutilate dead bodies
4. Do not kill children or infants

9. Do not destroy an enemy’s flock, unless you use it for your food
10. When you pass people who have devoted their lives to monastic services leave them alone

Saladin, during the crusades, followed the ethics and honored the Frankish army that he defeated. He also sent fruits and gifts to his rival king Richard when he fell sick. The number of followers of Islam was almost negligible initially. Thus, expecting a handful of people to force people to convert to Islam just doesn’t make any sense. Also, when the Mongols conquered most of the Islamic empire, they accepted Islam instead of destroying it. Thus, saying or believing that Islam was spread by the sword stands completely unacceptable. It is often believed that Muslims hate Jesus. The fact is Muslims consider Jesus as one of God’s greatest Prophet. Quran too mentions Jesus to symbolize good virtue and character. Every Muslim is supposed to believe in the virgin birth and the many miracles of Jesus Christ. The only difference is that Muslims do not accept Jesus as their God.

5. Intolerance For Other Religions Many consider the phrase ‘kill the infidel’ to be a teaching of Islam. It is however, a completely incorrect portrayal of Islamic laws. Islam denies killing of a person with other religious belief until they do not trouble a Muslim. Muslims are not supposed to bother the disbelievers who do not challenge or destroy Islam. Killing is instructed for Muslims only to defend their religion that too when other’s attack them and forces them to change their belief. In the Quran it says “God does not forbid you, with regards to those who fight you not for religion nor drive you away out of your homes, from dealing kindly and justly with them, for god loves those who are just.” This is one of the major reasons why people consider Islam to be a biased religion. It should be noted though that Islam considers women so high that it states heaven to be lying at the feet of a mother (woman). There are many Muslim countries who restrict women by putting up a few harsh laws which should not be confused with Islamic laws. Before Islam came to Arab, the birth of a daughter was considered to be an insult and female infanticide was too high. It was after the Prophet’s (PBUH) arrival that women got their share of human rights in Arab and actually represented the twin halves of men. A Muslim woman has every right to select or reject any man for marriage and also has equal right to seek a divorce. Islam in no way forbids a woman to leave her house and drive. It only forbids them from practicing professions which are unethical. Islam states it necessary for a woman to seek knowledge and it is a considered a sin if she refuses it. This misconception goes both way. Some consider all Muslims to be Arabs and a few other consider all Arabs to be Muslims. In either way, it remains a misconception only. Neither all Muslims are Arabs nor all Arabs are Muslims. Roughly Arabs are only 15% of the world’s total Muslim population. The whole of Middle east combined comes in third after East Asia (69%) and Africa (27%). Also, Muslims form about three quarters of the total Arab population. Almost 25% of the Arabs follow other religions including Christianity and Judaism.

2. Islam Is Against Terrorism One of the darkest spot on the name of Islam, terrorism has completely dismantled the history of Islam. Almost every single practice of any terrorist group is against Islamic laws then how is it an Islamic terrorism? When Islam forbids its followers and warns them strictly to avoid harm to any innocent then how is terrorism Islamic? Quran clearly states,“fight in the way of Allah those that fight you but do not transgress limits for god does not love transgressors.” This means that Muslims are allowed to fight only in their self defense and cannot harm anyone who doesn’t harm them. Islam teaches to avoid violence even in self defense. It does not allow a Muslim to attack an innocent under any condition. By far the biggest misconception about Islam, Jihad has been portrayed as the biggest evil force behind terrorism. The literal meaning of the Arabic word ‘Jihad’ is struggle. With respect to Islamic studies it refers to one’s own struggle in the way of God. Struggle to preach what God wants his humans to do. There are many forms of Jihad but the most important one is the Jihad al-nafs which means struggle against ones self. Giving up your hunger and thirst is Jihad. Taking out time from our worldly life to remember God five times a day is Jihad. Giving out a share of our hard earned money to the needy is Jihad. A suicide to kill others is not Jihad. Killing innocents on the name of Allah is not Jihad. Anyone who kills an innocent for any reason is considered a criminal according to Islamic laws.

Is it right to blame a religion for the misconduct of its followers? Is it right to even call them a follower when they don’t follow what is taught to them? Islam or any other religion never has and never will spread hatred. Religions don’t create a divide, it is the people who do. Every religion was, is and will always remain equally beautiful no matter what its evil followers do.

Ridiculous Reasons By People As To Why Women Are To Be Blamed For Molestations – RVCJ Views On It.
Official Twitter Account Of Aadhaar Hacked? Here’s The Truth Behind This Weird Tweet!