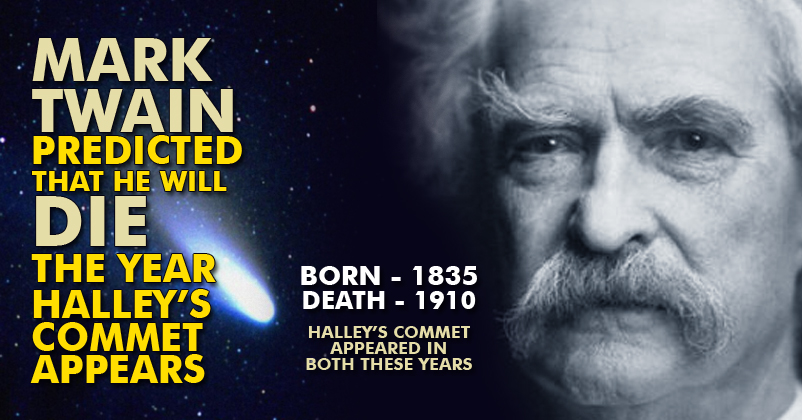 Where there’s life, death is inevitable. It is something that no one can escape whether you’re a celebrity or a nobody. When it’s your, it’s your time. A lot of people spend their lives living in fear of death, but the fear of death comes from an unfulfilled life. Only a very few people can become immortal through the legacy they leave behind, these celebrities or famous people continue to live on through their work. But no matter how prepared you think you’re, death always comes without knocking. And the only question we can ask her is, Why now?

Death is always surprising, we have no idea when and how it will occur. But we all have heard stories of people predicting their deaths. You can call it a coincidence or some psychic ability, but there are many occurrences where some people, through a coincidence or mystical connection, predicted their own death. There are celebrities who predicted their departure in songs they wrote, in their journal, in chat with their closed ones. Some used calculated reasoning maths to predict their end, while others have simply made offhand comments.

So let’s take a look at the 9 Famous People Who Predicted Their Own Death Accurately!

Mark Twain, lauded as the “Father of American Literature” predicted his own death based on an astronomical phenomenon. Mark Twain was born in 1835, the same year in which Halley’s Comet flew by the earth. Twain predicted that he’ll die the year the Comet comes, and it his prediction came true. He died of a heart attack, one day after the Comet appeared the brightest in its history in 1910. In 1910, Twain had said, He was one of the greatest guitarists of all time, the natural gifted and talented blues and jazz artist predicted his death through his song. Two years before he released his first album, he had recorded a song called “The Ballad of Jimi” in 1965. Shockingly Jimi passed away 5 years later due to asphyxiation. The song he wrote, finished with the following lyrics,

Many things he would try / For he knew soon he’d die / Now Jimi’s gone, he’s not alone / His memory still lives on / Five years, this he said / He’s not gone, he’s just dead According to rumors, Marley accurately predicted about his death to his closest friends. He always knew he was going to die at the age of 36. His closest friends believe that the music icon possessed some psychic abilities. He could foretell people’s future by reading their palms. Bob Marley was considered a prophet by his closest people, due to the predictions made by him which came true. When he told his friends that he was going to die at 36, one of his friends asked him why he would die at 36, he replied, The french mathematician who was known for his for his work on the normal distribution and probability theory used the very science of mathematics to predict his own death. At the last point of his life, he noted that he slept 15 minutes extra every night. He calculated the date of his death as the day when the sleep time reached 24 hours. So the date when the extra hours accumulated to 24 hours was November 27, 1754. He died the very same date.

The day when these extra 15 minutes of waking up added to 24 hours, I’ll die.

The 16th President of the United States who led United States through its bloodiest war – The Civil War was shot dead by John Wilkes , while attending a theater play. Abraham Lincoln told his wife and friend that he had this dream where he walks into the White House to find a covered corpse guarded by soldiers and surrounded by a crowd of mourners. When Lincoln asked a guard who had died, the guard answered, “The president. He was killed by an assassin”. He was killed 10 days later.

The president was killed by an assassin. The twentieth century composer, painter who influenced the music of his time and innovated the compositional techniques like atonality, serialism, and the twelve-tone system. The composer suffered from triskaidekaphobia, the fear of number 13. He feared that he would die during a year that was a multiple of 13. On Friday, 13 July 1951, he had stayed in the bed all day long, he was very anxious and depressed, he died shortly before the midnight.

He believed that he would die on the date 13. He died on Friday the 13th. Best known as the former bassist of Weezer, Mikey Welsh predicted his death on the twitter. Two weeks after he tweeted the prediction, he was found dead in a hotel room in Chicago. Welsh’s Facebook page announced that the cause of his death was the heart failure. A drug overdose caused the heart attack. Welsh died in his sleep.

Dreamt I died in Chicago the weekend after the next (heart attack in my sleep). Need to write my will today. Lynyrd Skynyrd‘s ‘Street Survivors‘ album released in 1977 which featured the lead band engulfed in flames. Three days after the release of this album, the band’s plane crashed and killed Ronnie Van Zant, Steve Gaines, Cassie Gaines, and others. But that’s not all, the album’s most popular song “That Smell” has the following lyrics,

Say you’ll be alright come tomorrow, but tomorrow might not be here for you/The smell of death surrounds you/Angel of darkness upon you. The co-founder of the most commercially successful band “The Beatles” in the history of music, John Lennon told in an interview that he’ll probably be popped off by some loony, when he was asked how he thought he might die. Many fans suggest that Lennon predicted his death through the lyrics, Living on a borrowed time, without a thought for tomorrow” from his song “Borrowed Time”.

I’ll probably be popped off by some loony