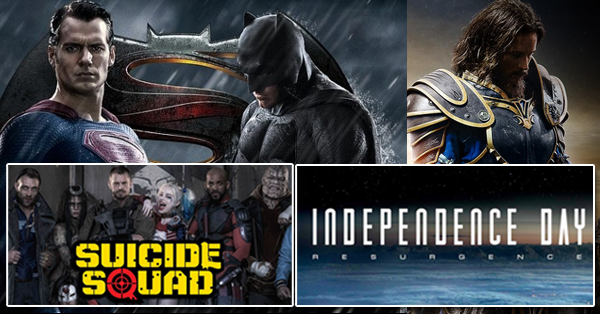 It just couldn’t get any better, it’s one hell of a time to be a movie fan. There’s a lot to be excited about for each and every cinema fan. When it comes to the blockbuster cinema, you guys are in for a delight. It’s gonna be Marvel with its superhero movies planning to break records, it’s gonna be DC trying to make an effective presence, it’s gonna be Disney with its adventurous, wonderful movies captivating the millions of hearts. So 2016 is gonna be a movie year, a year filled with so many Superhero movies that’ll make you jump off your seats. So those of you who are really looking forward to be captivated by the Hollywood blockbusters coming up in 2016 should check this out. This is the first time when The Dark Knight squares off against the Man Of Steel. This is where the DC cinematic universe ultimately starts. This movie is special for so many reasons; a refreshing start to legend of the dark knight, introduction of the Wonder Woman to the big screen, the first cinematic encounter of the Batman & Superman. At first many fans criticized the decision of casting Ben Affleck as the Batman, but after viewing the teaser, watching the trailer, we are confident that Affleck is going to nail the role. Unlike the Marvel movies, this movie is going to be dark and gritty, it presents a Batman who has gone through a lot, suffered a lot for putting up the mantle of the bat (After the death of Jason Todd). Fearing the actions of a god-like being left unchecked, Bruce Wayne returns to being Batman to combat the Superman. Directed by Zack Snyder, having multi star cast like Batman (Ben Affleck), Superman (Henry Cavill), Wonder Woman (Gal Gadot), Aquaman (Jason Momoa), Lex Luthor (Jesse Eisenberg), Alfred (Jeremy Irons), quite possibly The Flash (Ezra Miller), this movie is the most must-see movie of 2016. This movie is the Marvel’s equivalent to the DC’s Batman V Superman, one of the most anticipated Marvel movie of 2016. After the destruction that occurs in Avengers: Age of Ultron, an incident leads to the Avengers developing a disunion over how to deal with the situations, which leads to an open fight between Captain America and Iron Man. This movie is crucial for Marvel for so many reasons, it introduces the characters like Black Panther, and the new Spider-Man. This is important because there’s gonna be a reboot to the Spider-Man movie series in 2017, the Black Panther is making its debut in 2018. So Civil War sets up the tone for the upcoming Marvel Superheroes stand alone movies. This movie also sets in motion the events that will lead us to Avengers: Infinity War. And here’s the best reason why you should watch this movie, it’s gonna be Chris Evans’ Captain America against Robert Downey Jr’s Tony Stark

2016 is gonna be a year which is full of superhero movies. Bryan Singer is known for making superhero movies that people enjoy. These X-Men prequels might not get that much publicity or buzz as the Marvel and D.C. do, but they continue to be fun-filled and entertaining. The movie brings Channing Tatum’s Gambit to the cast, along with returning stars Hugh Jackman and Jennifer Lawrence. Apocalypse is set to round off the trilogy of movies that begin with Matthew Vaughn’s X-Men: First Class. Days Of Future Past is the highest grossing X-Men movie to date, and we’re really hoping to see more of Evan Peter’s Quicksilver. If there’s an animated movie that can beat Minions for the #2 spot, and even challenge Frozen for the #1 spot then this is that animated picture. Taking place six months after the events of Finding Nemo. Finding Dory will be focused on the amnesic character Dory, and will explore the idea of her being reunited with her family. The friendly-but-forgetful fish Dory suddenly recalls some of her childhood memories, accompanied by Nemo and Marlin, she sets out to find her family. Featuring the returning favorites Marlin, Nemo, Tank Gang, and others. This movie is going to give Frozen a run for its money for sure. Revisiting a classic tale of Mowgli, an orphan boy raised in the jungle by wolves, a bear, and a black panther. This is like nothing you’ve ever seen before. All the visual effects and CGI work for animals, creatures, and outdoor settings are going to mesmerize you. The voice cast they got together sounds great, the CGI effects are phenomenal, but most importantly it’s the classic story of Mowgli revisited with a grand scale, and deep emotions. This movie is going to be a blockbuster, going to amaze the audience, and win the hearts of the critics. The movie presents us a new Clown Prince of Crime in the form of Jared Leto as Joker. This movie introduces several DC villains to the big screen; Jared Leto (The Joker), Margot Robbie (Harley Quinn), Will Smith (Deadshot), Jai Courtney (Boomerang), Cara Delevingne (Enchantress) and Viola Davis (Amanda Waller). Written and directed by David Ayer (Training Day, Fury), this movie looks promising. However with that big star cast and so many new characters are making their cinematic debut, this movie may end up jumbled and overstuffed. But with David Ayer as the script writer, it all comes to the script which is the heart and soul of any movie. This is gonna be a blockbuster. An origin story about the Deadpool, a former Special Forces operative Wade Wilson after being subjected to an experiment which leaves him with new abilities, he’s now in search of the man who nearly destroyed his life. After going through the experiment, Wade is left with accelerated healing powers, disfigured skin, and a “dark, twisted” sense of humor. If you’re not familiar with Deadpool then I would suggest you to read the comics first. This version of Deadpool is going to be more authentic, more justified to the comic book character. This is the sequel to the 2010 Alice In Wonderland, since we all fell in love with the Tim Burton’s first trip to the Wonderland. Returning from the original movie are Mia Wasikowska as Alice, Johnny Depp as the Mad Hatter, Helena Bonhan Carter as the Red Queen and Anne Hathaway as the White Queen, and Sacha Baron Cohen plays a new character called Time whose powers allow Alice to visit the Wonderland characters at different times in their lives. An adaptation of the classic video game series, Warcraft portrays the origin story of the initial encounters between the humans and orcs, from the perspective of both the Alliance and Horde. Pleasing the WoW fans isn’t an easy task, but if the Universal can turn LOTR books into a classic trilogy, this video game movie has a good chance at the major box office glory. The cast doesn’t feature the star power it might have, but with the direction of Duncan Jones (Moon, Source Code), and the larger fan-base for the game should factor in the favor of the movie.

If a movie like Jurassic World can come in and revive the Jurassic Park movie franchise then it won’t a surprise if Independence Day: Resurgence does the same thing. 20 years after the events of the first film, the people across the globe, the International community recovers and builds up Earth’s defenses using technology recovered from remains of the alien forces. But before getting defeated at the hands of humans, the aliens were able to send a distress signal to their species. As a result new alien ships are coming to earth, to threaten the humans, to invade them.