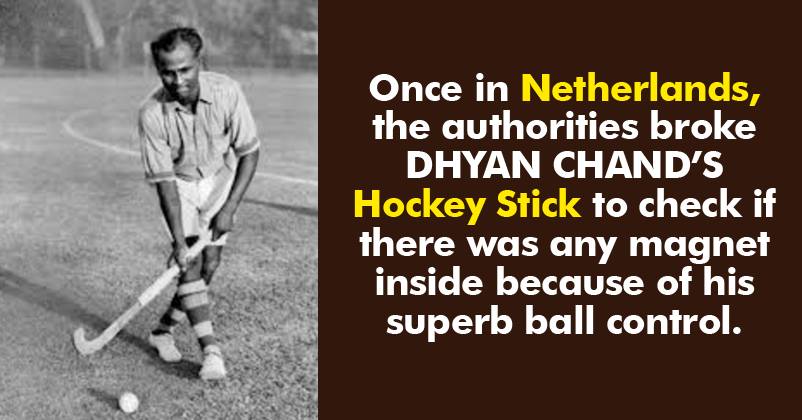 Major Dhyan Chand is the greatest hockey player of all time for his goal-scoring feasts and awesome ball control. Indian hockey team was world’s best team and won 3 Olympic gold medals in 1928, 1932 and 1936 and Major Dhyan Chand performed better than anyone else at that time. We collect some interesting facts the magician of hockey Major Dhyan Chand. 3. Pankaj Gupta, first coach of Dhyan Chand predicted he would one day shine like a “chand” (moon) and that’s how he got his surname. According to some other sources, he used to practice a lot during night and that’s why his fellow player called him “Chand”. 4. After watching Dhyan Chand performance at the 1936 Berlin Olympics, Hitler offered him German citizenship and higher army post. But Major Dhyan Chand turned it down. 5. The cricket legend Don Bradman once said “He scores goals like runs in cricket” after meeting him face to face. 6. Once in Netherlands, the authorities broke his hockey stick to check if there was any magnet inside because of his superb ball control. 7. Residents of Vienna, Austria, honoured Dhyan Chand by setting up a statue of him with four hands and four sticks, depicting his control and mastery over the ball.

8. India’s highest award for lifetime achievement in sports is the Dhyan Chand Award in honour of Major Dhyan Chand. 10. The Government of India honoured him with  Padma Bhushan (India’s third highest civilian honour) the same year he retired. Continue Reading
You may also like...
Related Topics:dhyanchand, hockey

10 Facts That Even Joker’s Fans Don’t Know About Him!
We Bet You Never Knew These 10 Amazing Food Facts