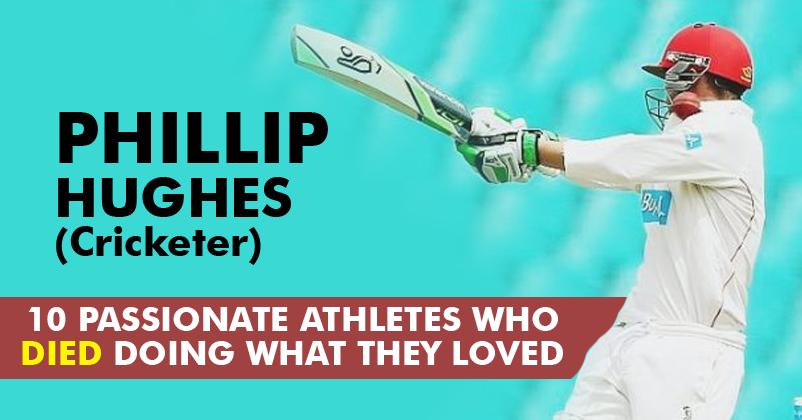 Athletes spend countless hours on the field for their sport, giving every ounce of energy, every drop of sweat and blood they have to be the best. Injuries in sports are inevitable, they are a part of an athlete’s career. There is not a single athlete who has not experienced a single injury during the course of his career, most of the promising athletes lost their momentum due to being sidelined by an injury. Take any sport, whether it’s Football or the gentleman’s game Cricket.

Injuries are expected during the game, but you know what’s unexpected? Death.

Usually sports are a means of entertainment, they are supposed to be safe? But really are they? Over the time, the safety measures have been increased, the quality of the protective gear worn by athletes in many types of sporting events have improved.  Every sport event has medical personnel standing by, proper health equipments in place, in case of a serious injury. The good news is that there are fewer fatalities than there used to be. But still every untimely young death is tragic, and death of an athlete who was in his prime is even harder. The only comfort is that these remarkable athletes died doing what they loved.

So let’s take a look at 10 Passionate Athletes Who Died Doing What They Loved! Cricket is known as the gentleman’s game, but Hughes death shocked the followers of the game. This has to be one of the most tragic and sad incident in the history of the game. While playing a Sheffield Shield match at the SCG, Hughes was struck below the helmet to the left upper side of his neck during batting. The injury to the neck caused vertebral artery dissection leading to subarachnoid haemorrhage in the brain. Such type of accidents in Cricket are very rare. The accident could have been avoided if Hughes had been wearing a modern helmet. A racing driver who won three Formula One world championships three times and is considered one of the greatest F1 drivers of all time. In 1994 San Marino Grand Prix, Senna was leading the race in the beginning. As Senna rounded the high-speed Tamburello corner on lap 7, his car ran off the track and  hit a concrete wall at a speed of about 233 km/h. He was extracted from his car by his medical team and was airlifted to a hospital where he was declared death. When he crashed into the wall, his brain stopped working, he died from fatal skull fractures, brain injuries and a ruptured temporal artery. A tragic tale of a young Korean boxer who worked very hard to become the number one lightweight contender and earned a world title shot against the world champion Ray Mancini. Their fight was brutal, Kim dominated the early rounds, but Mancini began to dominate, landing many more punches than Kim did in the later rounds. In the beginning of the 14th round, Mancini hit Kim with a brutal right hand that caused him to fly towards the ropes, and his head hitting the canvas. Minutes after the fight, Kim went into the coma,  he was found to have subdural hematoma. He died four days after the brain surgery performed on him. The 24-year-old Hungarian professional footballer Miklos Feher entered the match as a substitute for Benfica during a Portuguese league game against Vitoria Guimaraes. He assisted another player for the match’s only goal, he was given the yellow card in injury time. He bent forward and then fell back to the ground. Cardiopulmonary resuscitation was performed on him by the team doctors. He was taken to the hospital where he died. The cause of his death was cardiac arrhythmia brought on by hypertrophic cardiomyopathy. Professional wrestling is no joke. The worst tragedy that happened in the history of WWE is the death of Owen Hart. At Over The Edge PPV Owen Hart was set to make an entrance from the ceiling, and he fell from the ceiling. He landed on the ring-post hitting his back on it and it was announced on-screen that his bones were crushed. Hart was taken to the Truman Medical Center. Several attempts to revive him were made, but they proved to be futile. The cause of his death was internal bleeding. Reggie Lewis was a basketball player for the Boston Celtics. He averaged 20.8 points per game in his last two sessions and finished with a career average of 17.6 points. During an off-season practice match, Lewis suffered sudden cardiac arrest and was declared dead on the court. During his first and only NBA All-Star Game, he showed signs of heart problems. He was able to play for 15 minutes only, in which he scored seven points. Victor Barrio was a talented and stylish bullfighter. On 9 July, on the occasion of Feria del Angel in Teruel, Aragon, the Spanish metador started his performance as always, taunting the bull with his red cape. Victor made a mistake, he got too close, allowing the bull to sink a horn into his thigh, and tossing him. Barrio died due to his injuries which he received from the bull. Ryan was working very hard to appear in the 2008 Beijing Olympics. The Elite Marathon champion Shay went to the Olympic trials in New York’s central park where he collapsed after running 8.9 km into the race at 8:06 a.m. He was taken to the hospital where he was pronounced dead at 8:46 am. An autopsy revealed that Shay had died from complications associated with an irregular heartbeat. He was diagnosed with an enlarged heart. The 26-year old medal-winning open-water swimmer competed in the FINA Open Water 10-kilometer World Cup in Dubai. He was unable to complete the race, when his fellow swimmers noticed his absence, they tried locating him. Two hours after the finish of the race, the search operation went on. It took another 90 minutes for the deep-sea divers to locate his body underwater. Crippen death was caused by either cardiac abnormality or due to drowning of fatigue as his heart was working very hard. Dale Earnhardt, known for his aggressive style driving which had earned him the nickname of “The Intimidator”. He had over 25 years of experience, won a total of 76 Winston Cup races, seven championships in the Winston Cup. At Daytona 500,  Earnhardt was involved in an accident, while defending his lead, he lost control and hit a wall, on the final lap of the race. At the hospital he was pronounced dead, the cause of death was blunt force trauma to his head.