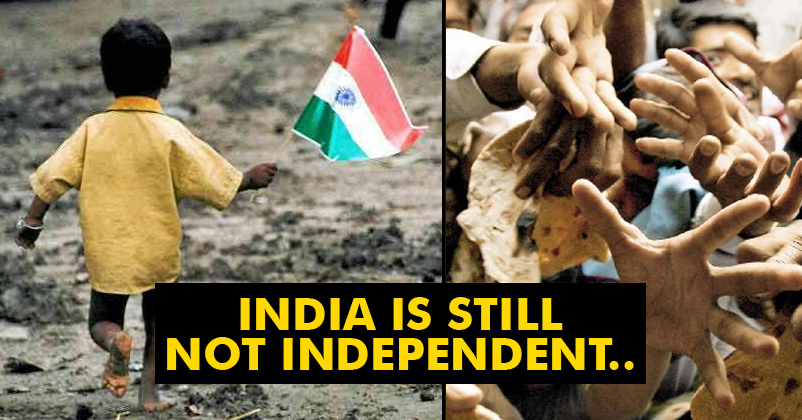 After 69 years of independence from the British rule, we cannot call ourselves a completely independent nation. After a long struggle and a lot of bloodshed, India was declared independent from the Ambit of British rule on 15th August 1947. We adopted a written constitution and a self-government, a government of the people, by the people, and for the people, to run this country. It’s the day of the independence, we celebrate the birthday of our nation, we are filled with zeal and pride, we can hear the patriotic songs playing in the background. We see the pictures of our tricolor flag, ‘Happy Independence Day’ hashtags and pictures trending on Twitter and Facebook and TV channels showing deshbhakti films and songs to celebrate the occasion.

But we need to think for a minute and ask ourselves, are we really free? Even after 69 years of freedom, we are still not free from the clutches of caste system, dowry, and the old-age society prejudices. We are still a country where farmers commit suicide due to crop failure, where you have to bribe the people in a government office to get your done. It’s high time that each and every citizen of the nation realizes their responsibilities and play their part in construction a truly independent nation. Freedom is not free, it comes with a responsibility which we must understand.

Let’s take a look at a few things which show why India is still not an independent nation. Terrorism is the global problem. It’s one of the greatest threat to our civilization. It is the weapon of the weak. It has no religion, it is pure evil. Until and unless we don’t get rid of this evil, we cannot call ourselves free. Our country is taking drastic steps against the cross-border terrorism Our government has made it clear that any further dialogue with Pakistan on any issue will happen only if it is ready to talk on the relevant issue of cross-border terrorism cross-border terrorism and follow-up on the terror attacks in Mumbai and Pathankot. Another big reason why India is still not independent. Countless times, countless political parties have used this issue to get votes and promised to take action, and yet nothing big happened. It’s not an overnight process, we need to change the mindset of the people because corruption starts from us. The day we decided we won’t pay bribes and pay our income tax properly on time, will be the last day of corruption. India’s GDP rate is around 8%, but still poverty is still prevalent in India especially in the rural areas, where 70% of the Indian 1.2 billion population reside. India spends only 1% of its GDP on health, whereas China is planning to spend around 3-4%. 50% of Indians don’t have proper shelter. 70% don’t have access to decent toilets. 85% of villages don’t have a secondary school. 35% of house-holds don’t have a nearby water source. 35% of the population is below the poverty line. Every problem in our country is a side-effect of illiteracy. Illiteracy is the mother of all problems, it gives birth to issues like poverty, unemployment, population increase, and a lot more. Our past governments has failed to utilize programs like Sarva Shiksha Abhiya effectively. India is home of largest population of illiterate adults in world – 287 million, amounting to 37% of the global total. India is ranked 123rd out of 135 countries in female literacy rate. India is a secular state, but large-scale violence have periodically occurred in India since independence. Lately the communal tensions and religion-based politics have become more prominent than ever. A Muslim man was beaten to death and his 22-year-old son severely injured over false rumours that his family had eaten beef for dinner. Caste system has become a dividing element in our society. A latest survey reported that 27 percent of Indians still practice caste untouchability. It is a situation where people are willing to work, but can’t find one to earn a living. Unemployment is a very serious social issue in India. You know unemployment is serious when you hear the news that engineers are applying for the peon posts. 23 lakh people applied for 368 posts of peon in the state secretariat in Uttar Pradesh. Among the applicants, 255 candidates with a PhD degree and more than two lakh hold BTech, BSc, Mcom and MSc degrees. Our education system should focus on skill development so that people who can’t study further at least make a decent living.

We cannot expect to develop India without ensuring women’s safety and providing them equal rights to men. The condition of women in India has always been a matter of concern, issues like domestic violence, treating women inferior to men, and restricting them within the four walls of the house must be dealt with firmly. The eve-teasing against the girls should be stopped and people with such doings should be punished. Child labor denies the kids the right to an education and a normal childhood. This is perhaps the worst social evil in India. Children are exploited and are forced to work in dangerous places like cracker factories. They are ill-treated and abused. The government has made rules and laws to stop this evil, but nothing has proved to be effective. Hence you can see the small kids working in the factories and shops. There are many social evils prevailing in our society due to the ignorance of the people and the inability to take the necessary action against them. According to a report of UNICEF, India has second-highest number of child marriages. Gender discrimination continues to be a huge problem within Indian society. Only 54 percent of Indian women are literate as compared to 76 percent of men. India has one of the highest female foeticide incidents in the world, the female child population in the age group of 0-6 years declined from 78.83 million in 2001 to 75.84 million in 2011. Despite India being one of the fast growing economy in the world, it fails to provide proper healthcare facilities to its entire population. Despite health improvements over the last thirty years, lives continue to be lost due to lack of proper medical care. Approximately 1.72 million children die each year before turning one. 50% of all villagers have no access to healthcare providers, 33% people in India have no access to toilets. 80% of the population leave their stools in the open or throw them in the garbage. Only 26% of the slum population has access to safe drinking water.

Here Are Some Amazing Ways To Celebrate Independence Day
“We Still Want Azadi From?”, Here Are The Honest Replies From Our Users.!!