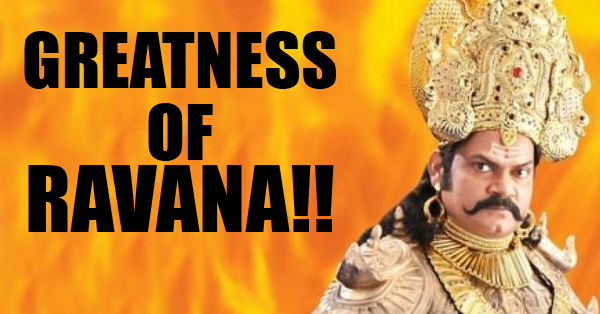 There is no denying the fact that Ravana was a great devotee of Lord Shiva as well as amazingly genious who had immense knowledge. He is called 10-headed as he had expertise in 4 Vedas named Rig Veda, Sama Veda, Yajur Veda & Atharva Veda and 6 Vedangas called Nirukta, Vyakarana, Siksha, Chandas, Jyotisha and Kalpa. In spite of all these virtues, he had only one problem, i.e., ego which proved to be fatal for him and for his family.

However, in this article, we present you 10 reasons why Ravana was great:

1. Ravana was a noble scholar as far as Ayurvedic medicine was concerned. If truth be told, he was behind the invention of “Arka Shastra” and as a proof for the same, we can refer to “Arka Prakshaya”, the book revealing this fact.

2. It’s a very well-known and widely accepted truth that he was a great Brahmin who worshipped on a regular basis following all the rituals and customs. Additionally, he also used to play Veena along with Sandhya Vandanam.

3. “Eating beef cause to infect ninety eight new diseases to human beings,” as written by Ravana in a book. What’s more, he revealed remedies for diseases of newborns in “Kumara Tantraya”. 4. He was extremely intelligent as well as an amazing researcher who delved into 3 fields; time travel, evolution of universe and path to heaven from earth.

5. Even though he grabbed Lanka from his step brother Kuber, Ravana was considered an efficient and compassionate king. After killing Ravana, Rama said that the world lost a nice soul.

6. Ravana was among Lord Shiva’s most devoted followers and obtained blessings in form of several boons from the God. Besides, Shiva was much pleased with Ravana’s musical talent.

7. It won’t be wrong to say that Ravana was the best brother since he stood against the God for the sake of his sister and the one who can go to such an extent for his sister must be really very great.

9. He was very intellectual and knew in advance that the end of his family as well as his own life would be done by Lord Rama.

10. Ravana did not touch Sita Ji despite the fact that she was in Lanka for a long period of time. Do you have more point? Share with us in the comments section below. Also write your opinion about the article in your comments.