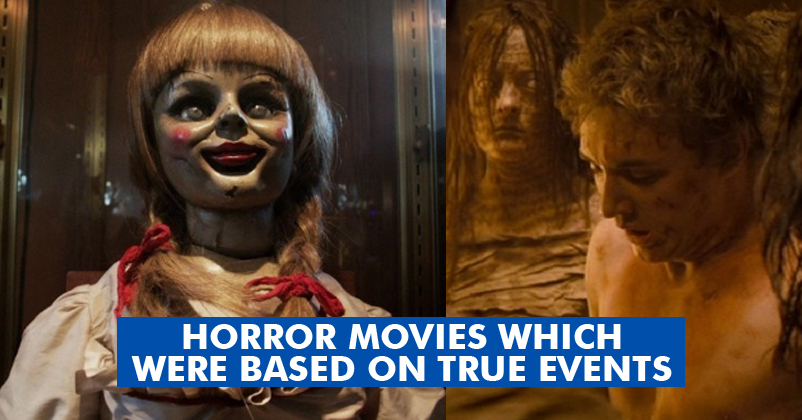 There’s no better cure for boredom than watching a horror movie. People like to be frightened, they like the rush of the fear, to feel their hearts beat faster, it’s sort of kick. The best part of horror movies is that we know what’s coming, we know how things are going to play out, who’s going to live, who’s going to die, we even like the bad guys more than the good ones. But once the movie ends, credits rolls, we come out of the theater with a sigh of relief knowing it’s all just a work of fiction. The evil depicted in the film, the innocent family who suffered the tortures of the entity, the house that’s haunted can’t possibly be true, right? But what if I told you the horror film that scared the hell out of you is based on true events.

Based on real paranormal investigators/demonologists Ed and Lorraine Warren’s account of investigation of events surrounding the inspection of the Perron family house in Rhode Island. They believed that the house of Perron family was haunted by an evil witch named Bathsheba Sheran. Bathsheba was a practicing Satanist according to the Warrens’ account in the Journal, she murdered her young daughter as a sacrifice, and committed suicide in that house.In reality the Warrens couldn’t get rid of the demonic entity from the Perron’s house. Story about the demonic possession of a young girl Emily Rose. When she dies, the blame of her death is put on the priest who performed the exorcism. A lawyer takes up the case to save the priest, believing him to be true and innocent of homicide. The young girl Emily Rose is based on Anneliese Michel who had suffered from epileptic seizures. Her family was convinced that she was possessed, they took help of two priests to cure her. The priests performed exorcism rites on her for 10 months. She died of malnutrition and dehydration. Story about a couple who move into a large house where a mass murder has been committed years ago. They began experiences paranormal activities, strange manifestations which drive them away. This is based on the supernatural events experienced by the Lutz Family when they moved in the house on 112 Ocean Avenue in Amityville, New York. Another fun fact, this house was also investigated by Ed and Lorraine Warren for being haunted. One of the greatest classic horror movies of all time, introducing the iconic character of Leatherface. It tells the story about a group of friends who fall victim to a family of cannibalistic psychopaths while on their way to visit their friend’s grandfather grave in Texas. This film is considered to be the origin of the slasher genre. The iconic Leatherface character and many of the plot details were inspired by the crimes of the infamous serial killer Ed Gein. Ed Gein had exhumed corpses, kept their bones as trophies, and used the peeled facial skins from corpses as masks. The film’s story is about a family as they move into a house for the Cancer treatment of their son Matthew. The family soon begins experiencing supernatural behavior in their new house, they are haunted by the supernatural entity present in the house. The film takes its inspiration from Carmen Snedeker and her family, who also worked with paranormal investigators Lorraine and Ed Warren. The 1992 book, In a Dark Place: The Story of a True Haunting, is the basis for the movie.

Carla Moran, a single mother is attacked and molested by an invisible assailant. The episodes of poltergeist activities continue as she is physically and sexually attacked, leaving bruises and bite marks on her skin. She takes the help of a psychiatrist, but all in vain. After another attack, she seeks help from parapsychologists, who discover that it’s the doing of a supernatural entity. The film is based upon the novel of the same name, the film and novel was based on the 1974 Doris Bither case. A woman named Doris Bither alleged the ghosts of three Asian men were molesting her The film deals with the demonic possession of a 12-year-old girl as her mother tries to save her with the help of two priests.The Exorcist is based on the novel of the same name which is inspired from the supernatural events surrounding an anonymous boy, under the alias of Roland Doe, and a series of exorcisms performed on him. The priests experienced the boy speaking in tongues, the bed shaking and hovering, similarly as depicted in the movie. The exorcism of Roland Doe was one of three official Catholic Church-sanctioned at that time. Based on the Jack Ketchum novel of the same name, The Girl Next Door follows the story of two young girls who, upon losing their parents in a car accident, are sent to live with their aunt. Their aunt is a sadistic psychopath, and what follows is unspeakably ugly. The girls are tortured and abused by their aunt and her sons. It’s based on the real story of Sylvia Likens. Likens’ parents, who worked in the carnivals, had left her and her sister, Jenny, in the care of their family friend Gertrude Baniszewski. Gertrude Baniszewski encouraged her children, and the neighborhood children to torture Likens. Likens was kept deprived of water, forced to consumer her own feces and urine. Likens died of a brain hemorrhage and malnutrition at an age of 16. A Newspaper columnist and his wife are involved in an accident. The wife dies later of an unrelated brain tumor. After her death, the husband discovers some mysterious drawings of a winged creature, similar to the one her wife described at the time of the accident. Years later, the reporter is drawn to a small West Virginia town to investigate a series of strange events, which are similar to her wife’s drawings. It is based on the book of the same name, the book is based on the actual events that happened between 1966 and 1967 in Point Pleasant, West Virginia. This mysterious creature was Mothman, a large white creature with red eyes, a  flying man with ten foot wings, as described by two young couples in 1966. The 1967 collapse of the Silver Bridge which killed 46 people, and the sightings of Mothman are believed to be connected. Story about a family who has the misfortune to have their car break down in an area far away from the civilization. The area is inhabited by violent mutants. The family is stalked by the savages, and they must fight for their survival. The cannibalistic mutants depicted in the movie take their inspiration from Sawney Bean’s family, a 48- member cannibal family in Scotland. The clan was believed to have killed and eaten over 1,000 people.

Can You Spot The Cat In The Pic? We Bet You Can’t Even Though Its Right There!
Inspite Of Doing Good, TRPs Of ‘The Kapil Sharma Show’ Are Disastrous! Check Out!