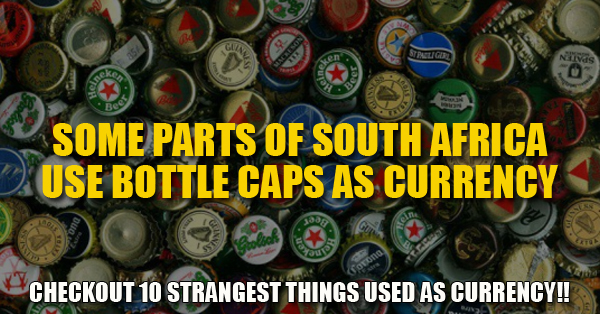 These days, currencies around the world are mostly made of some metals and paper or plastic. But did you knew that these were not the only currencies used by people around the world for trade? Even nowadays some different types of currencies are coming out like famous digital currency called “Bitcoins”. This is our list of top 10 things used as currency. Source
When the Japanese forces attacked China between 1944 – 1945 , they used Manchukuo Yuan made of cardboards due to the lack of metal. Source
Fijian islands adopted paper notes just few years back, before that they were known for using the teethes of Whales. In order to convince the residents of the islands that the notes were worth anything, the island’s authorities had whale teeth inscribed on all of the currencies. Source
Yes, its true, until recently these kissi pennies were used as currency in many parts of Africa. If one of the poles of this pennies broke, the currency was worthless for them and then only an ceremony performed by a witch doctor could bring the value of these pennies back. Source
Buckskins was one of the most popular currencies in the world. In fact, the popular slang term used for the American dollar, the “buck”, can be traced back to this Buckskins.

Source
You can use these tire money as an official form of payment on eBay Canada. When Canada Tire started these fake looking money as a consumer loyalty program they didn’t anticipate that small businesses would start accepting it. Source
Some places in Africa even use beer bottle caps as their currency, since the breweries started printing a bonus prize under this beer caps in an attempt to copy Coca Cola. Source
Do you know, With what the Dutch settlers bought the island of Manhattan from its native residents? Answer is “Beads”.

Source
Beaver Pelts was used between the Europeans and the native Americans for trade. Because it was one of the things that both sides found to be highly valuable. Source
Digital currency are becoming more and more popular these days with number of internet users increasing day by day. Even some e-commerce and payment sites support digital currencies now. The most famous digital currency right now is Bitcoins.