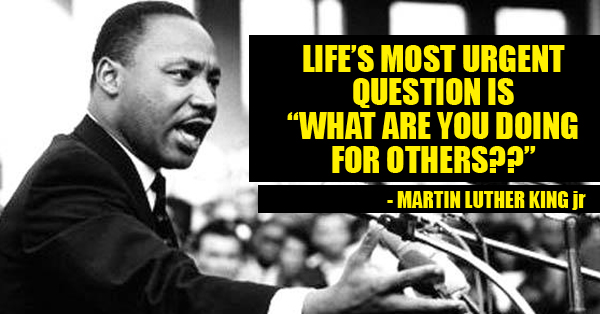 He is not that popular in India but he is  someone everyone should definitely know about. He was one of the greatest civil rights leader and an inspiration for all of us.

In almost every major city in American, and dozens of small ones, there is bound to be a street bearing his name. 2. Influenced by a trip to India

King studied Gandhi’s ideas of peaceful resistance extensively and even ended up taking a trip to India at one point. 3. His heart was 20 years older than him

It was found that although King was only 39, he had the heart of a 60 year old. Doctors concluded that this was probably due to the heavy stress he faced in his life. 4. Not the only member of his family to be assassinated

His mother, Alberta Williams, was also killed in her Atlanta church in 1974. He won posthumous Grammy and he has also been awarded the Medal of Freedom and Congressional Gold Medal, the highest honors an American civilian can receive because of his speech Why I Oppose the War in Vietnam. 6. In spite of rumors there is no evidence he had Communist ties

Unfortunately it wasn’t until the late 70’s, however, that the FBI admitted to not finding any evidence to incriminate him. Partly as a result of his friendship with Stanley Levinson, a New York attorney who had ties to the Communist Party USA, the FBI monitored him heavily.

8. Stabbed by a mentally ill woman

While he was at a book signing in 1958 he was stabbed by a woman who was later concluded to be mentally ill. 9. Spent honeymoon in a funeral parlor

Upon marrying his wife, Coretta, he realized that it was not very easy for him to go on a honeymoon due to his skin color, so they ended up having it at a friend’s funeral parlor. At 12 years old he jumped out of a second story window in an apparent suicide attempt following the death of his grandmother.