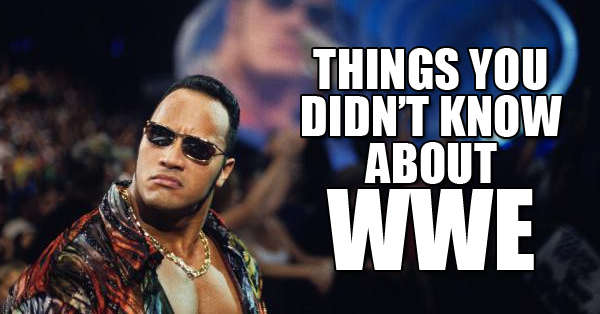 Mostly Everyone is familiar with the name ‘WWE’ which stands for World Wrestling Entertainment. We all have grown up watching professional wrestling, and many of us have even tried the wrestling moves on our siblings. Everyone knows the popular WWE superstars like John Cena, Dwayne ‘The Rock’ Johnson, The Undertaker. But how much do you really know about the WWE?

Here are the 10 Things That Every WWE Fan Must Know

1. WWE is scripted, it’s not fake. It’s just like watching a good movie where the story is scripted, but no one comes out saying they didn’t enjoy the movie. The emotions, the dedication, the commitment of the superstars are real. They have got the creatives who write the storylines for the superstars, plan feuds. The winner of a match is predetermined, they have gone through how the match will be finished, what spots to pick. 2. WWE stars put their bodies on the line for us. They do the high-flying risky moves, jump off a 20 feet ladder just to entertain us. Superstars bleed by doing the blade job. This blade job is done by the wrestler himself or by the opponent wrestler. The blade is kept hidden from the camera. The referee wears a wireless earpiece, to allow the backstage officials to communicate with them during the matches. 3. WWE has numerous times warned the fans not to try the moves at home or anywhere. The professional wrestling moves should only be performed by the professional Wrestlers. Even a single botch could result in a life-threatening condition like paralysis. There are several notable examples of this; Summerslam 1997 when a botched piledriver given by Owen Hart to Steve Austin resulted in Austin sustaining a neck injury which ultimately forced him to retire early. 4. WWE has went through a number of transitions. Earlier in the 80’s the WWE programming was family-friendly. The company’s face was Hulk Hogan who took wrestling to the global heights, made wrestling popular. Then came the ‘Attitude Era’ at a time when WWE was struggling against WCW in the Monday Night Wars. The faces of the company at this time were Stone Cold Steve Austin and The Rock, these superstars made WWE mainstream. Today the face of the WWE is John Cena. 5. WWE was earlier known as the WWF (World Wrestling Federation) up until the mid 2002. WWF lost the trademark suit against the environmental organisation which used the acronym WWF (World Wildlife Fund). Furthermore the wrestling company saw this an opportunity to use the name World Wrestling Entertainment (WWE) putting more emphasis on the entertainment part.

6. WWE turned back to the family programming ‘PG’ when Linda Mcmahon (Wife of Vince Mcmahon, Chairman) was running for the senate. They transformed the WWE to kids friendly, family suitable, more appealing to the wide range of the audiences. As a result of WWE going PG, WWE stopped using the cursing, swearing, profanity in their promos and segments. The violence, adult oriented content and use of bladding for blood is now so rare. The use of blood, swearing is allowed only and only if Vince gives it a green light. 7. WWE has been accused many times of using the anabolic steroids for the rapid growth of muscles. Following the death of Eddie Guerrero (due to cardiac arrest) which many believe was a consquence of using the drugs, and the unfortunate tragedy of Chris Benoit. WWE has made its drug testing policy very strict. WWE promotes zero tolerance against the use of steroids in the sport. 8. There are many controversies associated with the WWE. The tragic death of Owen Hart in 1999 at Over The Edge PPV, which happened due to a botched entrance. The Montreal Screwjob which made Vince Mcmahon the ‘Evil Corporate Boss’. The Chris Benoit double-murder and suicide tragedy which forced WWE to completely remove ‘Chris Benoit’ name from all of their programming and merchandises. WWE now no more acknowledges the name ‘Chris Benoit’. 9. The Monday Night Wars, a period when WWF (now WWE) and WCW went head-to-head in a ratings war. WCW was continuously beating WWF in the ratings. Due to the Monday Night Wars, WWF transformed its family-friendly product to a more adult oriented product, knows as the Attitude Era. WWF’s Attitude Era turned the tide of Monday Night Wars in the favor of WWF. WWF bought its main rival WCW in March, 2001. WWE also purchased the hardcore wrestling promotion ECW in the mid-2003. WWE is the largest wrestling promotion in the world.

10. WWE is a very vast sports and enterprise company. WWE is not just limited to wrestling. They make movies, they have their mechandises, video games, music. WWE has also launched many intiatives to stop bullying like ‘Be A Star’ and they support the Susan G. Komen cancer mission. Recently WWE has also launched its WWE Network which is a 24/7 WWE channel which allows you to watch any episode of RAW, Smackdown from the WWE library, any PPV from the archieves, the original WWE Network shows like Table For 3, Legends with JBL, WWE Legends. Keeps you updated with each and everything related to WWE.