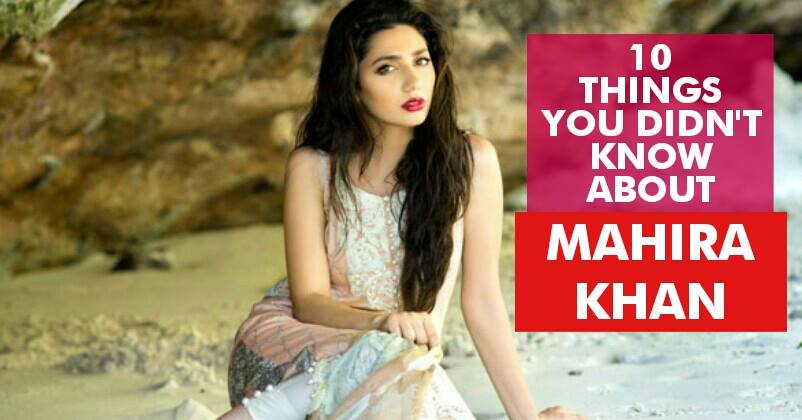 From being a VJ on MTV Pakistan to hosting a reality show, from being one of the most popular and highest-paid actresses in Pakistan to making her Bollywood debut in “Raees”, surely Mahira Khan has come a very long way. The Pakistani sensation made her Bollywood debut with ‘Raees’, but Mahira was kept away from the promotion and everything around Raees. Mahira Khan’s Bollywood debut film is doing very good at the box office and making big money. The film faced strict competition from Hrithik’s Kaabil, but managed to dominate the latter in terms of box-office collection. Mahira wasn’t a famous name in India, but her role in SRK starrer ‘Raees’ got her in the headlines. And that’s not all, earlier Mahira was involved in a controversy, a video had surfaced in which the 32-year-old Pakistani actress was caught insulting the Indian film industry.

So let’s take a look at 10 Things That You Must Know About Mahira Khan!

1. Mahira Khan was born on December 21, 1984 in Karachi, Pakistan. She hails from Urdu-speaking Pathan family. Hafeez Khan, Mahira’s father was born in Delhi, he moved to Pakistan after the partition. Mahira has a younger brother Hasan who is a journalist. 2. Mahira completed her matriculation from Foundation Public School in Karachi, Pakistan. At the age of 17, she moved to California where she attended Saint Monica College. She studied at University of Southern California for her Bachelor’s Degree, but never completed the graduation. She returned to Pakistan in 2008. 3. During her stay in United States, she worked as a cashier at a Rite Aid store in Los Angeles, where she had to interact with costumers, she also had to mop the floors, clean toilets, and close the store at night. 4. Mahira met her future husband Ali Askari in Los Angeles and fell in love with him. Some reports say that she met Ali at Indus studios in Pakistan. Ali and Mahira dated for a year, they finally tied knots in 2007, Mahira was only 23 at that time. Her father was against her marriage, but despite of her father’s disapproval, she married Ali. However, the couple divorced in 2015, together they have a son Azlaan, who was born in 2014. 5. She started her career as a Video Jockey (VJ) in 2006, she hosted MTV Pakistan’s live show “Most Wanted”. In 2008, she hosted Aag TV’s reality show “Weekends with Mahira”. She made her acting debut in the highest-grossing Urdu film “Bol” in which she played a supporting role. 6. Mahira became famous by acting in the drama television series “Humsafar”. This Pakistani TV show made her an overnight star and a household name. The drama series was also aired in Indian on Zindagi channel.

7. She made her Bollywood debut opposite Shah Rukh Khan in ‘Raees’. The movie was a critical and commercial success, the film is currently the highest grossing film of 2017. She had said in an interview that she is a big Bollywood fan, as a kid she used to watch Bollywood films on the video cassettes. She is also a big fan of the Bollywood actress Madhuri Dixit. Her favorite Indian actor is Guru Dutt. 8. She is Pakistan’s most popular and highest-paid actress, she has received numerous awards through out her career. In 2012, she was awarded the title of the Most Beautiful Woman in Pakistan. 9. Mahira was involved in a controversy. In an interview back in 2011, Mahira Khan said that the Pakistanis should not be inspired by Bollywood at all. When the interview clip went viral on the social media, she received a backlash from the Indians. However, she changed her stance later as her first Bollywood film ‘Raees’ was going to be released all across India. 10. Mahira is an obsessive foodie, she couldn’t control herself when it comes to food. And despite of having such eating habits, she is in a stunning shape, she doesn’t even go to gym. She also loves writing, she writes daily in her personal dairy, she also loves Urdu poetry. So guys did you enjoy Mahira Khan’s performance in Raees? Are you a Mahira fan? Is there something we missed about Mahira? Please Feel free to share your views and opinions in the comments.

Sagarika Ghatge Opens Up About Rumored Affair With Zaheer Khan! Here’s What She Said!
12 Super Flop Movies Of SRK That Proved To Be A Disaster At The Box Office!