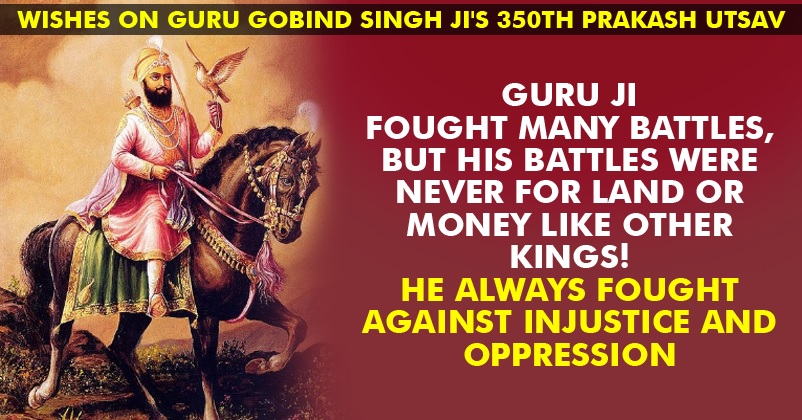 The whole country has turned into a Mini-Punjab for celebrating the 350th birth anniversary of Guru Gobind Singh ji.

Originally, he was born on 22nd December 1666 (Julian Calendar) as Gobind Rai, but his birth anniversary falls in the month of January as per the lunar calendar. He was the 10th and the last Guru of Sikhism and his teachings have been an inspiration to the entire Sikh community; his preachings and values have been carried across from generations to generations.

On this day, the Sikh community gathers at Gurudwaras and offers prayers to the Guru; all the celebrations are very simple, but filled with excitement, love and respect.

In the year 1699, Guru Gobind Singh Ji formed the Khalsa and he chose 5 dear ones or “Pyaaras” from different locations and castes; he wanted to prove that humanity is the only religion that must be followed. One thing which Guruji always said is “Manas ki jaat sabae ek hee paechanbo”, which means, treat humanity as one race. Since then, all Sikhs have been following this saying with great respect.

1. He was born to Guru Teg Bahadur and Mata Gujri at Patna’s Takht Sri Patna Sahib. 2. Gobind Rai was just 9 years old when he became the 10th Guru of Sikhism. What happened was that his father Guru Teg Bahadur was martyred by Emperor Aurangzeb for protecting the rights of Kashmiri Hindus. After martyrdom, Guru Gobind Singh Ji was throned as the 10th guru. 4. In 1699, he formed Khalsa Vani; all the followers were named with title Singh, which means Lion. The 5 Ks of Khalsa include Kesh (Hair must be uncut), Kangha (Wooden comb that symbolizes cleanliness), Kara (To be worn for self restraint), Kacchera (Knee-length shorts that a Sikh Must wear for showing readiness to go on a battle) and Kirpan (Sword for defense) 6. He fought many battles but there was no mean or political motive; these battles were against oppression, weaknesses and injustice. He strongly believed that a sword must be used only when other methods fail. 7. He was a master in archery and weapons. In fact, he had the most expensive and unique weapons that time. Many Sikhs might not be knowing about his javelin named “Nagini Barcha” that Bhai Bachittar Singh used for attacking a mad elephant which Mughal forces had sent for attacking Sikhs in Chamkaur fort.

8. His compositions and poetry are unmatched. When he was just 19, he composed “Jaap Sahib”. The vocabulary that was used stressed on just 1 fact i.e. universalism. 9. He is also known as “Sarvansh Dani”. This is because he sacrificed his life and family only for fighting against oppression and wrongdoings. For him, the whole Khalsa community is his sons and daughters. 10. Since he was the last Guru, he formed some code of conduct and practices for Sikhs. He asked them to accept Guru Granth Sahib Ji as their Guru after him.

So we hope you have been enlightened about his good work for the society; he is indeed a great inspiration for all of us, not just Sikhs.