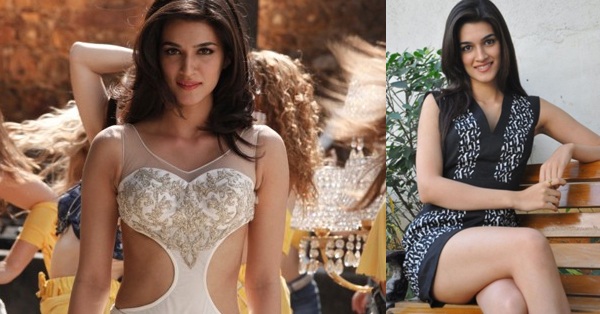 You’ve always heard this phrase – BEAUTY WITH BRAINS!! But there are very few examples justifying that phrase. And when it comes to Bollywood the probability gets even lesser. But there is one Actress in the B-Town who is Hot, Who is Cute & Who is an ENGINEER too. And she is KRITI SANON <3 Who doesn’t know this super cute and super sexy Actress from Dilwale. Kriti Sanon, 25 year old Delhi based B-Tech student and model who made her acting debut in a Telugu movie NENOKKADINE, opposite to none other than mega-star Mahesh Babu himself. This Twenty-Five year old Actress made her Bollywood Debut starring opposite to Tiger Shroff in the movie Heropanti, for which she even bagged a Filmfare award for the Best Female Debut.
She with her charm and super cute smile made a special place in millions of hearts. And now she is all set to rock in the biggest movie in the very beginning of her carrer – DILWALE starring none other than Shah Rukh Khan, Kajol & Varu Dhawan. The movie is all set to release on 18th December 2015.