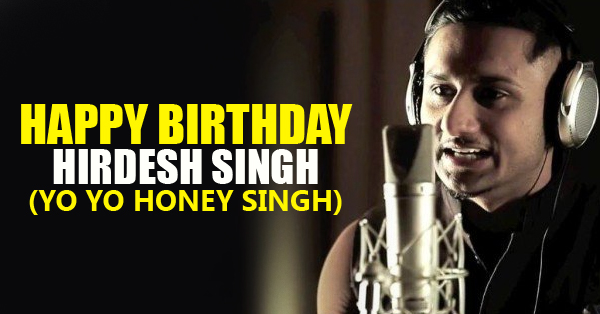 Honey Singh, famously known as Yo Yo Honey Singh was born on 15th March 1983 in Hoshiarpur, Punjab. He started as a recording artist and soon became Bhangra music producer, from then on he achieved a lot of success & popularity. He is currently one of the highest paid music producers in the Indian Film Industry.

15th of March 2016 marks his 33rd Birthday. So here presenting you 13 unknown and interesting facts about Yo Yo Honey Singh.

1. Yo Yo Honey Singh’s original name is Hirdesh Singh

Honey and Yo Yo Honey Singh are his stage names. 3. Yo Yo studied music at the Trinity School of United Kingdom (UK) 4. “Yo Yo” was picked from his Afro-American friends which mean “Aapka Apna”. 5. He is a great fan of Cricket & also loves to drive cars in his free time. 7. “Gabru”, a track from his International Villager album topped the Asian Music charts including the BBC Asian charts also. 9. Before making a Bollywood debut in acting, he was featured in couple of Punjabi movies.

He made his acting debut with the Punjabi film Mirza – The Untold Story and leading role debut with the film Tu Mera 22 Main Tera 22  and Zorawar to be released in 2016. 10. He charged Rs. 70 Lakhs for a song in the film Mastan, this is the biggest amount paid to a song artist till date in Bollywood. 11. He made his Bollywood acting debut with the musical – thriller film Xpose

However, that was a disaster at the box office. 12. Honey Singh has worked with almost all the top celebrities of Bollywood.

Some of them are Lungi Dance with SRK, Party with Bhoothnath with BigB, Party All Night with Akshay Kumar, Dheere Dheere with Hrithik Roshan and with many others. 13.  He has won the following Awards: