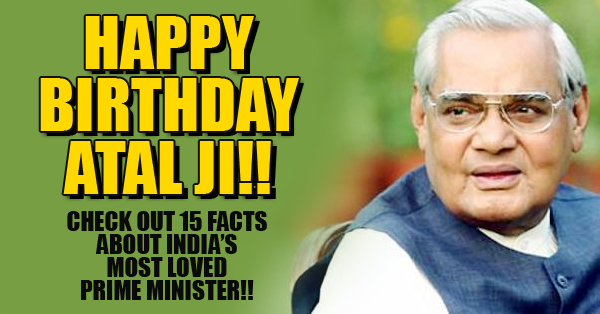 First non- congress Prime Minister of India to complete his full term in office, Shri Atal Bihari Vajpayee was born on 25th December 1924 in Gwalior State (during British India). Vajpayee completed his secondary education from Government School. He was graduated from Gwalior’s Victoria college (Laxmi Bai college now) with distinction in English, Sanskrit and Hindi. He was awarded a first class degree after completing his post graduation with an M.A Political Science. He celebrates in 91st birthday on 25th December. 2. Atal Bihari Vajpayee was jailed for 23 days at the age of 18 for participating in Quit India Movement led by Mahatma Gandhi

Being a great follower of Mahatma Gandhi, Atal ji & his elder brother was imprisoned for participating in Quit India Movement. 3. He was a Parliamentarian for more than 40 years, elected 9 times to Lok Sabha & 2 times to Rajya Sabha

Only election he lost was in 1984 against Madhav Rao Scindia from Gwalior. 4. He is the only person to be elected as Member of Parliament from 4 different States

He was elected from Uttar Pradesh, Gujarat, Delhi and Madhya Pradesh. 6. He held the Highest Office for 3 times.

Vajpayee became 10th Prime Minister of India in 1996 but held the office only for 13 days before resigning. NDA proved the majority again in 1998 and Atal ji served as the Prime Minister for 13 months till mid 1999. In 1999 general elections , BJP which led NDA won 303 seats sweeping the elections with a clear majority. Atal Bihari Vajpayee was sworn in as the Prime Minister of India for the third time on 13th October 1999. He is still the only non-congress PM to complete the full 5-year term. Let’s see can Modi become the second one. 10. Atal Bihari Vajpayee studied law along with his father at DAV College Kanpur, they even shared the hostel room 11. Atal ji has not married but has an adopted daughter Namitha 12. Atal Bihari Vajpayee is one of the Best poets of India

Here are the poetry works of Atal ji. 13. He announced retirement from Active Politics in December 2005 due to Health concerns 14. 25th December is celebrated as “Good Governance Day” on account of his Birthday. Here are the list of awards Atal Bihari Vajpayee has won for his services.

Here is an example for his vision:

In 1960, Nehru came to Parliament after inaugurating a 5-star hotel, Hotel Ashoka in Delhi. Nehru proudly said ‘I am very happy that I inaugurated this hotel today’

To this, first time parliament member and a young Atal Bihari Vajpayee said in a reply ‘this is the saddest day in my life when the Prime Minister inaugurates a Hotel instead of an Hospital’

From the Team of RVCJ, we wish Shri Atal Bihari Vajpayee a Very Happy Birthday..!!