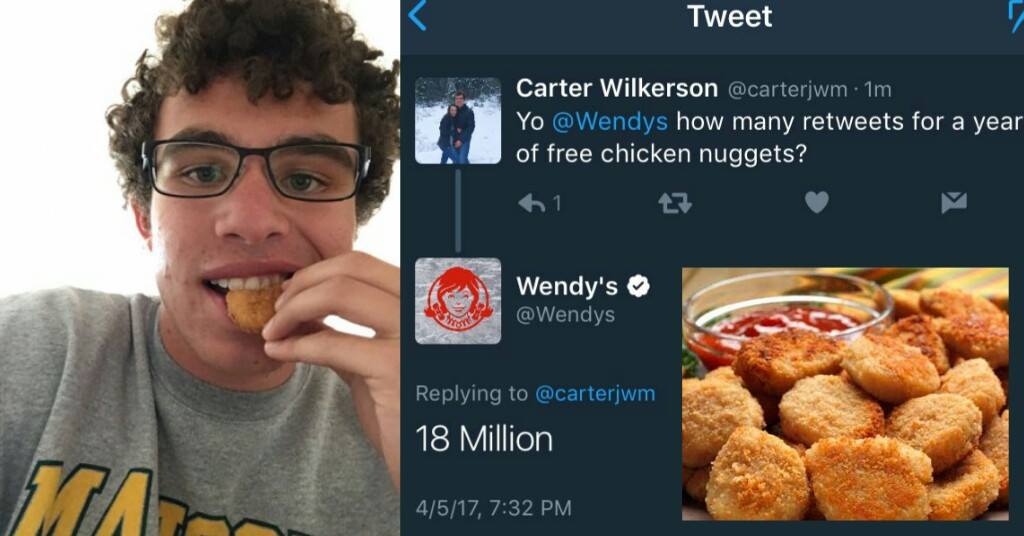 Scrumptious chicken nuggets are damn tempting and its lovers can go to any extent for it. Don’t believe us? What if we tell you that a 16-yr Nevada guy is on a megawar of retweets for it? Yes, that’s right! Carter Wilkerson who is madly in love with chicken nuggets tweeted an extremely famous fast food chain called Wendy’s for free chicken nuggets for one whole year just for the sake of fun. And guess what? He actually got a positive reply from Wendy’s on the condition that if he got 18 million retweets, he would be rewarded with lip-smacking chicken nuggets absolutely free of cost for an entire year. Naturally, the man accepted the challenge and confidently said, “Consider it done”.

HELP ME PLEASE. A MAN NEEDS HIS NUGGS pic.twitter.com/4SrfHmEMo3

“I sent out the tweet as a joke but then they responded with the outrageous number… Then I put the screenshot up and it started gaining momentum.”

His tweet shortly went viral and big companies, such as Amazon, Google, United Airlines, etc. supported the man by retweeting.

When Carter got such an immense support, his father advised, “it’s great if it has a great cause other than eating chicken nuggets for a year.”

The boy also liked the idea and made up mind of utilizing his popularity for good cause. He created a website for selling #NuggsforCarter T-shirts and every penny earned from it would go for donations for providing a helping hand to an educational scholarship, Breast Cancer patients’ families and Mom’s on the Run, which is a local NGO that works for the welfare of breast cancer patients.

Presently, Ellen DeGeneres holds the record of the most retweeted tweet for the very popular selfie of an Oscar group which got 3.3M retweets.

If only Bradley's arm was longer. Best photo ever. #oscars pic.twitter.com/C9U5NOtGap

Wilkerson is about to get 3M retweets and shortly, he might be the most retweeted man.

I'm coming for you Ellen

He got such an overwhelming response which even Wendy’s hadn’t expected.

Honestly has gotten way more RTs than we expected.

However, they also want Wilkerson to achieve this milestone.

Nah, not afraid. It would honestly be pretty awesome if he got that many.

If you get the 18 million RTs, we'll give you a free flight to take you to any @Wendys in the world in a city we serve. Good luck! https://t.co/igxnPg1JUF

Hey @carterjwm, sorry you have @ATT. Switch to @TMobile & I'll give you a year of free @Wendys chicken nuggets myself + more! Seriously. https://t.co/RmVygHPPob

He had only 150 followers when he accepted the challenge. Now he has got more than 50,000 followers and a verified Twitter profile. He is now overnight celebrity on Social Media. He already got close to 3 million retweets and you never know he might be able to reach 18 million soon!

Are you going to retweet for Wilkerson?